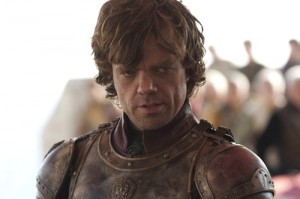 Tyrion Lannister the Imp can consort with kings and prostitutes, talk his way out of certain death multiple times, and cheerfully slap a bratty nephew with a flair that Casanova or Cyrano de Bergerac would be envious of. Television has been a lonely place without him these last few months. But with the upcoming season of Game of Thrones, that’s about to change.

HBO has released some clips of Game of Thrones in advance of the April 1st premiere. In them, Tyrion charms and flatters with the exact same wit he uses to threaten. He’s wonderful to watch in these clips.

Check him, I mean them, out.