5 Horrifying Facts You Didn’t Know About the Space Shuttle 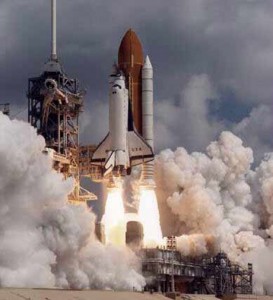 Criticizing the Space Shuttle is like punching America in the face. After all, it’s been a symbol of national pride for thirty years. But many of my friends and I are celebrating yesterday’s piggy-backed final flight of the Space Shuttle Discovery to the Smithsonian National Air and Space Museum…because a museum is where the shuttle belongs.

Yes, the Shuttle deserves a tip of the hat—after all, it took us to the final frontier. But as the former editor of the Space Future Journal, a website dedicated to space tourism, I’ve met people who are as enthusiastic about average citizens, not trained astronauts, visiting space as I am. And we know the Shuttle wasn’t the vehicle to take us there.

To us, the Shuttle was an obstacle.

I spoke to Will Watson, executive director of the Space Frontier Foundation, and he spelled out a few not-so-fun facts about the Space Shuttle. And maybe, just maybe, after reading this, you might think about it the same way as we do.

1. The Shuttle killed more people than any other space vehicle in history.

Let me spell it out for you: out of five Shuttles–Columbia, Challenger, Discovery, Atlantis, and Endeavor—two met a disastrous and fiery fate. That’s a 40% vehicular failure rate (updated) and a flight failure rate of 1.5%. This would have grounded any other vehicle permanently.

To compare, the Apollo I mission resulted in the death three astronauts during a launch pad test. The Mercury and Gemini missions had no fatalities.

The Chinese space program has currently had no fatalities.

As for the Russian space program, one cosmonaut died during the re-entry of the Soyuz 1, and three died on the Soyuz 11 after being exposed to vacuum.

(There is no hard data available on the deaths of Soviet-era cosmonauts, but unsubstantiated rumors suggest that there may have been Soviet casualties in the early days of the space race.)

2. It was extremely expensive

You can’t put a price on scientific research. But I sure as heck can. A total of 355 people flew on STS (Shuttle Transportation System), and not one of them was me. And I’m not just saying this because I’m jealous as hell, but the Space Shuttle missions cost too much and provided too little.

Although NASA says that it cost a trifling $450 million to launch each Shuttle mission, other sources find that price tag vastly underestimated. All five Shuttles flew a total of 135 missions. According to Space.com, in an article written in 2005,

[I]f the space shuttle program is terminated after 2010, then it will have a total lifetime cost of about $173 billion, Pielke reported.

One of the many reasons the Shuttles were so expensive was because some of the equipment used to launch, such as the external tank, were non-reusable and had to be replaced with each launch.