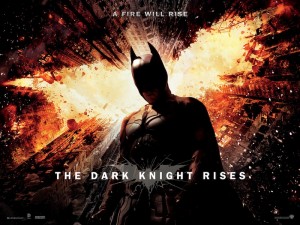 The Dark Knight Rises won’t be hitting theaters until July 2o, 2012, which gives us over two weeks of Batman-obsessed anticipation to work through. We can twiddle our thumbs or we can pass the time (336 hours more or less, but hey, who’s counting) celebrating our Batmania.

I know what I’ll be doing.

There have been literally dozens of Batman videogames over the years, but I haven’t loved any like I love Rocksteady’s Batman: Arkham Asylum, one of the most fun video games I’ve ever played. I swooped through the air, I wielded a batarang with deadly force, I managed to foil Batman’s many enemies, and I had a great time doing it. Batman: Arkham Asylum made me feel as if I were in the world of the world’s greatest detective. Batman: Arkham City, the sequel, is just as stellar.

If you prefer games with less intensity, there’s Lego Batman: The Videogame and Lego Batman 2: DC Super Heroes, for younger and older players alike. Switch characters to take on different abilities (the Penguin can fly short distances with his umbrella; Killer Croc has extra strength) and solve the puzz–to hell with that. Just play it so you can smash objects into smithereens.

For real-life, non-video games, Lego has some terrific Batman bricksets that you can assemble.

San Diego Comic-Con has multiple panels dedicated to all things Bruce, led by industry experts, including Michael E. Uslan, the executive producer of the Batman movie franchise ever since Tim Burton’s Batman (1989), and Scott Snyder, the writer of the current DC Comics’ comic book, Batman.

Batmobile fans will have something else to look forward to: All six Batmobiles used in film and television will be on display, from the 1955 Lincoln Futura used by Adam West in the 1966-1968 TV show, to the Tumbler from the recent Dark Knight films, and everything in between.

Five lucky fans who attend the Batmobile panel will even win a chance to sit in the Caped Crusader’s pimped rides.