6 Fun Facts About Leonard Nimoy on His 81st Birthday 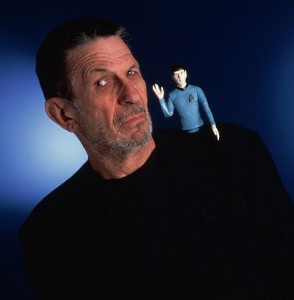 1995 — Portrait of actor with a doll of his character Spock. — Image by © Matthew Mendelsohn/CORBIS

When Leonard Nimoy dies (hopefully in the very far distant future), he’ll have the words “I Was Spock,” written on his grave. That’s because he’s known worldwide and beyond as the logical pointy-eared Vulcan from Star Trek. But even his many fans, some of whom can tell you that Spock’s blood type is T-Negative, might not know much about the actor who plays him.

So to celebrate Nimoy’s natal day, here are a few fun facts.

He’s more than an actor.

The multitalented Nimoy does more than act. As a director, he helmed Star Trek III: The Search for Spock, Star Trek IV: The Voyage Home, and several other non-Trek related projects. As a writer, he’s written two autobiographies, I Am Not Spock and I Am Spock, plus he’s released seven books of poetry. And as a photographer, his photos have appeared in the Massachusetts Museum of Contemporary Art and the R. Michaelson Galleries. (In one of his projects, “Secret Selves,” he photographed people in their alter egos, such as a wood sprite or a shark.)

He sings too. Unlike his friend and fellow Trekker, William Shatner, who tried to sing but ended up wailing instead, Nimoy has a decent soft rock/ballad voice. Click here for a listen to “Ruby, Don’t Take Your Love to Town” and “If I Was a Carpenter.”

Of course, he’ll forever be known for this camp classic, which makes me laugh out loud every time I see it:

No, that honor belongs to the B-movie Zombies of the Stratosphere. Later, Nimoy appeared in the wonderfully underrated giant-ant movie, Them! And let’s not forget his role in The Twilight Zone episode, “A Quality of Mercy.”

For a look at his portrayal of Narab the Zombie, check this out.