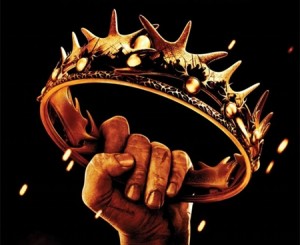 Season 2 of the epic fantasy series Game of Thrones has just finished, and Season 3 will likely air in February 2013. Who knows when George R.R. Martin will finish the next installment of his A Song of Ice and Fire series, The Winds of Winter? This means there’s a whole lot of empty space that we need to fill with Game of Thrones-related activities.

If you’ve read all of Martin’s entire series of books, you still haven’t read all of his Game of Thrones material: Martin has released the first chapter of his upcoming book, The Winds of Winter, which you can find here.

Martin has also published three novellas, known collectively as The Tales of Dunk and Egg. These stories chronicle the adventures of Ser Duncan the Tall and his squire, Egg (the future King Aegon). The fourth novella should be appearing soon, and Martin has other novellas planned. In addition, Martin is consulting on a companion volume for the series, written with Elio M. Garcia Jr. and Linda Antonsson, who are the administrators of Westeros.org, the largest A Song of Ice and Fire online community. The book is tentatively titled The World of Ice and Fire. Its release date of October 2012 is even more tentative.

For those who really want to plunge into the series, try Beyond the Wall: Exploring George R.R. Martin’s A Song of Ice and Fire, edited by James Lowder. These essays, with titles such as “The Brutal Cost of Redemption in Westeros: Or, What Moral Ambiguity?,” take a studious look into the characters and the situations. I particularly enjoyed the essay, “An Unreliable World,” where author Adam Whitehead describes the use of unreliable narration in the series (where he touched, all-too-brief briefly, upon the nature of Lyanna’s relationship with Prince Rhaegar.)

The pages of A Song of Ice and Fire aren’t just filled with sudden death and dismemberment. There’s sudden death, dismemberment, and descriptions of feasting. Two blogs have turned these off-the-cuff mentions of candied ginger or lemon cakes into excuses to head to the kitchen.

One blog, “Cooking Ice and Fire,” is great for beginner cooks like me, but the writers have sadly not updated it in some time.

The second blog, “Inn at the Crossroads,” goes that extra mile with not one but two takes on a recipe: a modern one and a medieval one (which seems to match the level of technology in the world of Westeros). In fact, bloggers of “Inn at the Crossroads,” Chelsea Monroe-Cassel and Sariann Lehrer, turned their blog into the book, A Feast of Ice and Fire: The Official Game of Thrones Companion Cookbook.

Want something a little less official? Alan Kistler’s The Unofficial Game of Thrones Cookbook has recipes such as Dothraki Duck and Sweetrobin’s Stewed Goat, along with references—but not direct quotes—from the book.

If you prefer to smash physical, rather than digital, opponents, there’s a board game, a collectible card game, and a role-playing game for fans of Westeros.

Thanks to ValyrianSteel, you can buy an official replica of the swords swung in Game of Thrones, including Arya’s best friend Needle. According to the site, “Each item is an individually serialized limited edition and comes with a certificate of authenticity personally autographed by Mr. Martin himself.”

If you wanted Longclaw, the sword of Jon Snow, you’re outta luck: it’s sold out.

At the end of season 2 episode, “Blackwater,” the group The National played a metal-inspired version of the Lannister’s theme song, “The Rains of Castermere.” But they’re far from the only musicians to pay tribute to Martin’s world.

YouTube is filled to the brim with tributes to Ramin Djawadi’s theme song in just about every genre of music you can think of (go to YouTube and search on “Game of Thrones” and “music” to see what I mean).

Particularly if that genre is metal.

You could watch the episodes on television, but that’s just so 20th century. Actually the best way to watch Game of Thrones is to view it on HBO Go for the iPad. HBO Go’s features include seamlessly integrated photos, quotes, and videos clips that you can access or ignore with a touch. And when you turn your iPad from landscape mode to portrait, you can get a good look at the map where the action takes place. Viewing has never been so much fun.