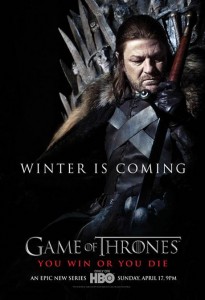 Game of Thrones is an epic, sprawling HBO series that critics have compared favorable to The Sopranos, Spartacus, The Wire, Rome, and Deadwood (crossed with Lord of the Rings, of course). Season 2 is about to start on April 1, and it’s not too late to catch up on season 1, thanks to Netflix and (finally!) iTunes. And I want to convince you to start watching now, because it’s not only one of the best series on television, but also it’s one of the best fantasy series of all time.

Here are some spoiler-free reasons to dive into the world of Westeros, where only the strongest or the smartest survive—but not the luckiest. Luck tends to run thin here.

Although much of Westeros is based on medieval Europe, Game of Thrones is unique in one important aspect: the seasons. There is no way to predict how long they will last. Think of what that means to a mostly agrarian culture.

As the show begins, summer has lasted for nine years, and the threat of an extra-long winter hangs over the head of every character. In fact, the northern family, House Stark, uses the threat of winter as a promise: their house motto is, “Winter is coming.”

On the front cover of the British edition of the novel, A Game of Thrones, a quote from The Guardian reads, “Characters so venomous, they could eat the Borgias.” The Guardian ain’t kidding.

– Ned Stark, the closest thing Game of Thrones has to a good guy. But you’ll quickly learn that there are no purely good characters, no motive-free heroes, no black and white, only every shade of gray in the Pantone color chart.

– Daenerys Targaryen. Backstory: Dany has lived in hiding, along with her brother Viserys, since the day she was born: they’re actually the siblings of the late Prince Rhaegar and the closest thing the kingdom has to contenders to King Robert Baratheon’s sword-edged throne. They’re poor, but they’re living under the protection of a benefactor. Dany is unsure of her place in the world.

And as the show begins, that’s all about to change.

– Khal Drogo. An analog to Genghis Khan who conquered much of Eurasia. You know that imfamous quote attributed to Genghis Khan (and appropriated by Schwartzenneger’s Conan the Barbarian), “To crush your enemies, to see them fall at your feet, to take their horses and goods, and to hear the lamentation of their women. That is best.” You can absolutely see these lines coming outta actor Jason Momoa’s mustachioed mouth.

(Trivia note: After season 1 wrapped up, Momoa starred as Conan in the 2011 version of Conan the Barbarian.)

– Tyrion Lannister. More on him, below.