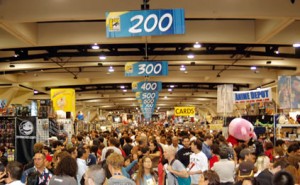 With 130,000 attendees in 2011, San Diego Comic-Con International (SDCC) is currently one of the United States’ largest conventions, one that boosted San Diego’s economy by $193 million.

So how did this tiny gathering grow into what some consider the must-attend event of the year?

For those who aren’t familiar with it, SDCC is far more than a comic book show: it’s a four-day event highlighting the best of popular arts, including movies, video games, and anime. Movie stars and directors attend to promote their works and to meet their fans; fans attend to meet them and to mingle with other fans.

I spoke with David Glanzer, Director of Marketing and Public Relations, who revealed some of the secrets to SDCC’s success.

“I think there’s a misconception, there’s an idea that people want to start off big. Comic-Con didn’t start off big as it is. It started off small and grew into what it is. Caution is not a bad thing.”

With a operating budget of only $9 million, Glanzer didn’t say how much of it was spent on advertising, except that it’s “very small.” “For many years our advertising was limited to comic book shops, specialty shops, hobby clubs.”

When SDCC did expand its advertising efforts, it remained local: “We started doing advertising that was geared toward the general San Diegans, people who have never read a comic before but enjoyed films.” This took place before the widespread adoption of the Internet. “Our attendees were really able to…spread the word, viral marketing before viral marketing was really a term.”

How can you rely on viral marketing? By throwing a terrific event and making sure your attendees are happy.