8 Potential Reasons to Want a SHIELD and Steam Box Combo 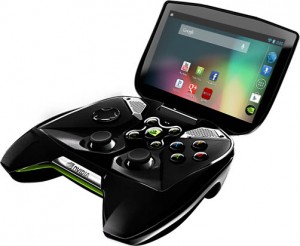 Although parts of the blogosphere are unimpressed with the upcoming NVIDIA gaming device, SHIELD (a gamepad with an attached touch screen), I find their lack of faith disturbing–or at least unimaginative.

As of right now, its ability to stream a game via Wi-fi from your PC to your SHIELD is nice but not game-changing. But I’m looking at the future of this device, and what I see looks like Australopithecus afarensis about to evolve into Homo sapiens.

So using a combination of “logical conclusions” and “wild speculation,” here are eight possible reasons for developers and gamers alike to get excited about adding a SHIELD to their PC gaming experience.

My husband and I have one 55-inch HDTV–which we use as our monitor–and two opinions. (We’re far from the only ones. It’s why Valve has add Big Picture to Steam.)

But there are times when we fight because I want to watch Downton Abbey and he wants to kill monsters (I would go so far as to say my watching Downton Abbey actually inspires him to kill monsters.) If SHIELD is more than a streaming device, he won’t have to delay his gaming gratification. One of us will be able to play videogames on a SHIELD device, and the other of us will be able to watch Lady Mary’s dresses on the big screen.

You can play Arkham City on a PC/games console, or you play the Armored Edition with extra Arkham excitement, thanks to the Wii U’s gamepad. And after watching this YouTube video, a great showcase for how the Wii U’s second screen can be used by games, I know which one I’d rather play.

And if the SHIELD lives up to my eager expectations, it might be possible to game Wii U-style on a PC.

Nintendo has put a lot of faith in the idea that a controller with an embedded screen is the next big thing. But since the Wii U is currently the only console that supports this (other than, to some degree, the PS Vita), that’s a lot of extra development work to support one platform. The SHIELD could make two-screen support more interesting to game developers if there were two platforms that could benefit from their work.

Local co-op for games like Borderlands or Left 4 Dead.

In recent years, there’s been a growth in multiplayer games with online co-op but still a relative dearth of same-room co-op. That’s a pity, because I grew up on Gauntlet, not MMO PvP, and playing with friends in the same room is something I genuinely enjoy.

As I said, my husband and I only have one TV, which is hooked up to our gaming PC, and our other computers are either underpowered or that gaming orphan, the Macintosh. Our only co-op games with each other are LEGO games and Uncharted 3 on the PS3.

But if NVIDIA evolves into my dream machine, one of us might be able use the gaming PC and the very nice television, and my husband can use the little SHIELD.

If we’re thinking outside of the box again, why does co-op have to be limited to two players? Why not play Valve’s Left 4 Dead or Team Fortress 2 with four-or-more-player local co-op, with additional players joining in on SHIELDs? (You’ll need to pair up SHIELD with a GTX 650 or 660M–or better–for the streaming feature.)

How many SHIELDs will be supported simultaneously? I don’t know–but I can hope more than one.

Switch on the Steam Box from the SHIELD, then browse the Steam Library and run a game from it.

Being too lazy to turn on the gaming PC may no longer be my secret shame. If I’m lucky, I may be able to switch it on from the SHIELD, even if it’s in a different room. And with touch-screen control over your Steam library, you could theoretically install games this way: Last year, Valve added the ability for users to buy a game from their mobile clients, then remotely install it on their PC.

I loves me my Professor Layton. And I could love him even more as Profession Layton HD. Think about it: The SHIELD, which has a touchscreen, can be used as the Nintendo DS’s bottom screen; your monitor/TV can be used as the DS’s top screen. Because if the SHIELD is gonna eat Nintendo’s lunch, it might as well go for their dessert, too.