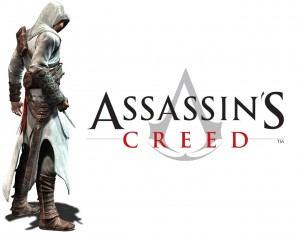 With Assassin’s Creed III launching into American Revolutionary stabbiness at the end of this month, it’s only natural to speculate exactly how it will evolve its predecessor’s DNA. While I’ve enjoyed the series so far, though, I still prefer Assassin’s Creed (AC1) to its successors.

Due to a confluence of events called “life,” I started AC1 but never managed to complete it. Yet I couldn’t resist taking a trip to 15th century Florence with the release of Assassin’s Creed II (AC2). At the same time, I returned to the original, which might make me the only person to have played both games to completion side-by-side. After a short time, I realized two things:

1) It is now impossible for me to go outside without mentally assessing climbing routes over all the buildings in my neighborhood.

2) Although conventional wisdom says the second game and sequels were better than the original, with easier controls, better gameplay, and more fluid combat, I beg to differ.

I enjoyed AC1 more than AC2, or Brotherhood, or Revelations, despite their better gameplay. Because the original game had one thing the others didn’t and still don’t: It understood its own premise.

In AC1, there’s no such thing as health or armor. There’s just synchronization—how close you (Desmond Miles) could faithfully recreate the actions of ancestor Altair. If you got hurt or fell off a building, you lost synchronization. Why? Because you suck, I mean, you weren’t as good an assassin as Altair, that’s why. The real Altair was too nimble to fall of a building, too stealthy to attract attention, and more lethal than Agent 47 (ooo, I went there). That’s why killing bystanders also cost you synchronization: You weren’t performing compatibly with the memory you were trying to retrieve. It’s a brilliant concept.

The sequels totally miss the point of how synchronization drives the first game. They introduce actual health, which could be restored with health tonics. In other words, medieval assassin Ezio actually does get thwacked upside the head by that Brute, no matter what you “remembered” him doing. (This means that Altair, who did not miss his jumps, is a definitively better assassin than Ezio. Ooo, I went there again.)

Replacing synchronization-as-health with real health has more impact than turning your blunders into historical footnotes, though….

In AC1, death is just a particularly bad sync-up; you replayed Altair’s actions so badly you lost touch with the original memory entirely; literally, you “lost the plot.” So the Animus has to reinitialize and drop you back earlier in the memory for you to try again.

For one of the very few times in a videogame, there’s an in-game justification for returning to the last checkpoint—in the context of the Animus, it actually makes sense. Only Bioshock‘s Vita-Chambers come close to justifying your ability to recover from death within the game’s continuity.

The sequels miss this too. Now you have health, and Ezio actually dies when you run out of it. Restarting from the checkpoint really is a game mechanic. Yes, you can argue the Animus is still resetting you, but you died from lack of health, not loss of synchronization, so this rationale is on much shakier ground. Synchronization no longer makes sense.

Although I prefer AC1, even I admit that collecting flags was almost entirely pointless. Sure, it restores health and provides a save point. Collecting all of the flags for a given area got you an extra synchronization bar unconnected to the main plot or memories. (If you actually collected all of them, I am truly sorry.)

But those flags weren’t real. (Others may argue this point. They’re wrong.) That’s why they sparkle: they’re projections of the Animus. Altair never saw them, You do, because you’re seeing them through the eyes of Desmond, who is reliving Altair’s memories. I always assumed that each flag represented a place Altair stood, only if for a moment. By occupying the same spot, you’re synched that little bit more—you’re closer to him, if you like.

So what do we get in AC2? Eagle feathers. Hard to find, like the flags, and a challenge to reach because that’s how the AC games roll. But in AC2, the feathers are real. You give them to Ezio’s mother, because collecting enough of them will cure her of grieving over Ezio’s younger brother’s death.

Because they were real, the feathers shouldn’t have been sparkling with Animus-ity. The sparkle represents things projected into the world that Desmond sees that weren’t present to his ancestor, such as the walls that block you from areas your ancestor hasn’t yet remembered going into.

The feathers break that rule. A quibble perhaps, but it underlines my impression that the developers of the AC sequels never quite understood how the concepts of the original Assassin’s Creed worked.