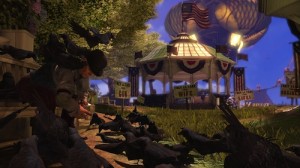 BioShock: Infinite tells a complex tale of archetypes and architecture, a Klein bottle tied with a Moebius strip. The story arc is seemingly complete, so you might think there is nowhere left to go from here. But as we learned from B:I, “here” is a malleable concept. Irrational Games plans to release three DLC packs, with new characters and new gameplay. What can we possibly expect, besides the unexpected?

Note that Irrational said they would add “new” characters. I say that just because a character is new, it doesn’t mean we haven’t seen them before: In this multiverse, where drunk gambler Booker DeWitt was a completely different character than baptized, hellfire-and-brimstone Zachary Comstock, there are any number of variants of the same people.

So I’m going to speculate about the upcoming DLC. If this sounds like “wishful thinking,” I’m okay with that.

Continue the story of Elizabeth

Although the main narrative is complete in terms of “our” Booker De Witt, we can’t say that about Elizabeth. Watch the final pre-credits scene closely, and you’ll notice the last Elizabeth—our Elizabeth—doesn’t vanish before the screen goes black. How can this be, if no reality contains the chain of events that leads to her?

Given her insight into the multiverse and her abilities to travel within, Elizabeth may be able to construct a timeline that satisfies her own existence, without the nasty genocidal side effects. The catch is, now we know what she can reach into other universes, any story continuation could literally be…anything.

One story that would make sense would be Elizabeth going back in time to a point where Booker was a gambler. She could help him take on his original problem, his owing money “to men you don’t want to be in debt to.” No debt, no motive to give up Anna. The ability to find ammunition lying around might come in handy in an all-out Gangs of New York-style fight.

Why would she need to do any of this? Perhaps recovering her missing pinky, which turns out to also have reality-altering powers, is the other way to fix the chain of events that led to her existence—and if you want someone to give you the finger, there’s no better place than NYC.

Elizabeth is also one of the main reasons B:I is so playable. I’d love to see more of her in any universe.

There’s a story that wants to tell itself, with the same elements every time, or as Elizabeth says, “Constants and variables. There’s always a lighthouse. There’s always a man. There’s always a city.” Somehow, a narrative has become embedded in the multiverse and seeks to exert itself, one way or another, in every reality. One story tells the tale of Columbia, and another, some variant like Rapture.

To coin a word from Roger Zelazny’s Amber series, there a true city of which Columbia and Rapture are both imperfect “shadows.”

Columbia and Rapture ultimately fall. But is that always the case? Or is there some true version of events where the city does not fall? And if so, what is the ultimate ending that results? Were the Luteces’ attempts to eliminate Comstock part of the narrative? Or working against it? If there’s a storyline that involves Elizabeth beyond the events of B:I, answering this question would surely feature somehow.

It’s obvious that an easy way to extend B:I is just to visit another miracle city and continue the Pattern (<–again, Zelazny). But I think that’s too convenient a narrative to satisfy Irrational, unless there’s some more fundamental purpose to doing so: Finding out why every version of the story ends in the collapse of civilization and the destruction of the city, and if there’s any variant where the collapse does not take place, might be that purpose. The twist, of course, might be that if we discover how the story is really supposed to turn out, it might not be a happy ending.

Actually, even though that would make tremendous DLC material for B:I, I think it’s better material for BioShock 3 (or should that be BioShock: Infinity Plus One?). But a DLC could tease the idea a little, just to see if our quivering brains could handle it.

Rosalind and Robert Lutece are the same person, just off by one chromosome (that, and the different universes thing). But Robert is very different from Rosalind in that he wants to prevent Elizabeth from becoming “the flame that shall ignite the world.” Rosalind, on the other hand, believes any interference is pointless.