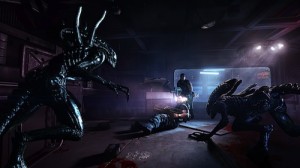 Something I noticed very quickly when playing Aliens: Colonial Marines (A:CM): If you don’t know where the xenomorphs are, they’re probably behind you. Or above you. Or some other direction in easy striking distance. And it’s all easy striking distance for the aliens, because that is how they roll–with extremely quick prejudice.

I saw all this and more during my criminally brief hands-on with the game and a chat with Brian Burleson, senior producer at Gearbox Software. Gearbox went out of their way to make this shooter as true to the 1987 movie, Aliens, as possible…and then top it. (Gamers who are unfamiliar with the films: You don’t need to see Aliens because it’ll make the game a better experience; you need to see Aliens because it’s awesome.)

Frankly, I have no idea how we had lasted this long. I started the demo about a quarter of the way through the game, where Corporal Winters, along with several other Marines, have recently survived a series of diverse alarums. The Marines have decided that their best course of action is to hole themselves up in the lost colony of Hadley’s Hope. Because that worked so well for the Marines in the movie.

(Backstory: As we’ve known for a few months now, the game A:CM picks up seventeen weeks where the movies Aliens and Alien 3 had left off. The Marines have been called in to rescue the crew of the Sulaco, but when they arrive on the sister ship, Sephora, they encounter the xenomorphs, as well as the sinister corporation Weyland-Yutani. For reasons Burleson has remained deliberately vague about, the Sephora has been lost.)

At first I was given a simple mission to place motion detectors around the colony, which gave me a chance to explore the wreckage of Hadley’s Hope. I got to see the upended bed in the med lab. A sentry turret on empty. A child’s three-wheeler. These touches are taken directly from the movie and the extended version. I consider it geek catnip.

After a few other tasks given to me by my sergeant, oh look, here come some xenos.

I had managed to get off a good first shot with a grenade launcher—which I was constantly reminded are in short supply and need to be conserved for emergencies—but had accidentally bathed myself in the alien’s acid blood. Game over, man. Game over.

Luckily, I respawned at the nearest checkpoint, a place where I had set up a sentry turret.

I wasn’t able to keep the turret in my inventory. Drat.

Speaking of guns, there are plenty to choose from (a quick count gave me twenty, but that’s just an estimate), many of which can be upgraded as your progress through the game. The same upgrades apply to armor, and you can replenish your rapidly depleting ammo stocks from the kit that’s lying around. You also level up during the course of the game, although Burleson said he wants to keep the level cap a mystery for now.

Burleson then put me on “god mode” for the purpose of the demo. It’s a good thing, too, or I would have died early and often. Soon I managed to pick up a smartgun that tracked the targets in my crosshairs for me. Shame about the limited ammo. But that forced me to use—what else?—short, controlled bursts.

Then, in a random room, I found the dog tags of Vasquez, one of my favorite characters from Aliens who had blown her lieutenant and herself, just to take out a few aliens with her. Because eff those xenos.

Waitaminnit, I remember Vasquez had died in a tiny little access tunnel. But here are her tags, sitting on a table, waiting to become one of your many collectibles. Was this some sort of continuity error in a game that’s taken such effort to recreate the world of James Cameron’s movie in painstaking detail?

“It makes you wonder how it happens…” Burleson said with deliberate casualness.

Did Burleson just give me a hint? Did he just imply that someone had survived the nuke-from-orbit ending of the film? Will we be seeing a mutant Vasquez roaming the land of LV-426? (Probably not, but I would play the hell out of that game.)

He would not say, because with that, it really was game over.

So what else did I learn about A:CM? I learned that players can take on three other friends on line. (From the makers of Borderlands, I expect no less.) There’s also a split screen two-player co-op mode, which I’m particularly thrilled about, because it’s a mode that isn’t given nearly enough attention when there’s multiplayer online killing to be had.