9 Ways to Console Yourself Now That You Finished ‘BioShock: Infinite’ 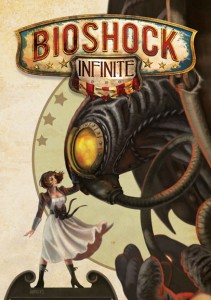 If you’ve finished BioShock: Infinite (and if you haven’t, you should get on that immediately), you’re probably in mourning for what you’ve lost when you left the beautiful yet lethal world of Columbia. But fear not: There are some ways to recreate the experiences you shared with Booker DeWitt and Elizabeth. And you don’t have to supply enough weapons to arm an entire uprising to do so.

Disneyworld/Disneyland. The Magic Kingdom’s Main Street U.S.A. was designed to recreate the world of Walt Disney’s childhood of the 1910s, around the time BioShock: Infinite was set. The architecture of Main Street U.S.A. is so much like Columbia’s that when I eventually go back to Disneyworld, I’ll probably be on the look-out for HandyMen and wondering where to pick up my sky hook.

Columbia’s loveliness, however, is made even more lovely because of its sky-high views. To enjoy the air up there, you can take the same method of transportation that many Columbians did: a zeppelin.

Unfortunately for those of us in the Western hemisphere, zeppelin rides are currently only available in Germany (the ride I took ceased operations). A one-hour flight from Friedrichshafen runs €395.00. If you want a similar experience closer to home, opt for a hot air balloon ride. I found one in Napa Valley for $240.

At the time of writing, there has only been one BioShock: Infinite fan film, although I expect that number to blossom. In this short film, Booker DeWitt learns that Elizabeth is definitely not a girl you can push around. In fact, it’s Elizabeth that does the pushing.

BioShock: Infinite was set in 1912, the same year Titanic sank. As it happens, there are two cookbooks dedicated to the food served on the Titanic, Edwardian fare that could easily have been found in Columbia (had Columbia existed): Last Dinner on the Titanic and Titanic: The Cookbook

Recipes include veal and ham pie, chicken a la Maryland, and poached salmon with mousseline sauce.

Although there are several fantasy series deal that with alternate realities and complex questions of identity, one of the best, rightly regarded as a classic, is Roger Zelazny’s Amber series. Here, “nine princes vie for the throne of creation” doesn’t even come close to describing this multifaceted blend of politics, sorcery, and multiverse-spanning chicanery. There are two series of five books each; you can get all ten in the Great Book of Amber omnibus for $17.39.

On the science fiction side, Dan Simmons’ Hyperion Cantos (Hyperion, Fall of Hyperion, Endymion, and Rise of Endymion) is as deep-concept as it gets: advanced technologies meet mysteries of the cosmos in a plot echoing the works of the poet John Keats. You can currently find all four books on Amazon for $7.19 each.

For $2.99, you can buy Bioshock Infinite: Mind in Revolt,  a 30-page e-book about the arrest and interrogation of Daisy Fitzroy by a Comstock loyalist, psychoanalyst Dr. Pinchot.

A skyhook. Because life is more fabulous with a skyhook. Available for $79.99.

The closest thing to a skyline we can find here on terra firma is a zipline. As with hot air balloons, ziplines can be found in many parts of the world. True, you won’t be zipping around neoclassical architecture, but there’s always a chance you can encounter a Booker-style mid-zip gunfight. (It’s a very slim chance, though.)

A zipline ride can be found in upstate New York for $119 per person.

Although the orchestral soundtrack is available, the cool soundtrack—the one with the fabulous out-of-time music—is not. (And you can read my rant about that here). You can hear songs like “Girls Just Wanna Have Fun” on YouTube. Or you can follow song contributor Scott Bradlee (who arranged the fabulous “Tainted Love”) or Ommie Wise (the group who played “Wild Prairie Rose”). (Note: Ommie Wise’s lead singer Jessy Carolina also sang “Fortunate Son” as a gospel.)

A BioShock: Infinite shirt, of course. Found at the Irrational’s online store for $24, wearing one proclaims to the world that you’ve played this fabulous game. Do us a favor, though, and be polite to people who wear it—unlike this guy.