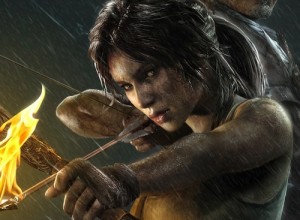 There’s no getting around it: Lara Croft, the star of the Tomb Raider series, is a genuine action hero with ginormous breasts, which has made her both a symbol of female self-empowerment and an object of sexual desire. But in Tomb Raider (2013), Lara has been rebooted into a younger version of herself. Is New Lara as determined, resourceful, and capable as Mature Lara? Is she an adventurer who can solve puzzles as well as climb, run, and shoot? Or will her breasts get in the way?

Young Lara is on her first adventure with friends and colleagues, looking for the lost kingdom of Yamatai. Their ship falls victim to freakish weather, and Lara and company are stranded on an island. But they’re not alone, and the inhabitants of the island want Sam (Samantha), Lara’s friend and roommate, for their nefarious purposes.

The Lara we know and love would immediately pull out her guns and get with the rescuing. However, in this reboot, she’s a younger, less secure version of herself and only starting out in her life of crypt analysis.

Typically, I ask frank questions to people with experience in their fields. But since I’m also a feminist, I’m just going to ask and answer these questions myself.

For those who don’t know it by its name, the Bechdel Test is a test for movies/television/games. In order to pass, 1) two named female characters have to 2) share a scene together, and 3) discuss something other than a man.

(If you think it sounds a little ridiculous to score movies and videogames based on whether or not two women converse with each other, consider only half pass the test…but not Star Wars, Lord of the Rings, and Avatar.)

I’m very pleased to say that, yes, Tomb Raider (2013) passes. Lara converses with not one but two woman about survival, as well as saving their colleagues.

The first woman, Sam Nishimura, is Lara’s friend and roommate, and we see them first interact in a videotaped conversation. Sam, a filmmaker, is encouraging Lara to have more confidence in herself. Their subsequent conversations have nothing to do with men—only survival.

The second woman, Joslin Reyes, is clearly hostile to Lara. It seems that the inexperienced Lara is the reason Reyes and her crew are on this disastrous mission, and she blames Lara for their troubles. Eventually Reyes comes to respect Lara.

Has she been physically objectified here as she has been in the past?

Since her inception in 1996, Lara has been an action heroine who explores, solves puzzles, and yes, even kills. But she’s done so with over-endowed mammary glands and no hint of a good support bra. As I said in my intro, although she has been recognized as a symbol of female power—after all, she gets the job done—she has also been viewed as an object of male pleasure. (You have but to google “Lara Croft” and “hot” to see what I mean.)

This new Lara is less pneumatic, more athletic. Instead of strappy short shorts, she wears cargo pants. Because of the fabulous motion-capture technology Crystal Dynamics uses, we can focus more on her face and her expressions more than her overall physical assets. This Lara is fantastically expressive and conveys pain, frustration, wonder, hope, and even more pain in a way that sets a new bar for other game protagonists of any gender to reach for.

Is she rescued…or is she a rescuer?

When first we meet our heroine, she’s aboard a ship, but in short order she and her colleagues are shipwrecked on an island. Then she’s kidnapped and hung out to dry…literally. She manages to free herself, but not without some pain. Although Prior Lara grunted with exertion, this version of Lara frequently groans in agony. In short order, she’s impaled on a spike and her foot is caught in a bear trap. She’s shot at, hunted, and manhandled (more on that, below). But she’s never been rescued…even when it would have made sense.

Her friend Sam, however, is kidnapped—and Forbes writer Jennifer Bosier points out that Sam is also a princess—and Lara rescues this damsel in distress (more than once; those islanders are persistent). Lara also rescues, and fails to rescue, various of her other shipwrecked colleagues.

But just because I like Lara as a character, it doesn’t mean I like everything Crystal Dynamics has done to her. She is forced to kill a deer for sustenance, and soon, she kills to defend herself. But as the game progresses, there is no option to play the game stealthily.

(Seriously, by the end of the game, she’s murdered up an entire island. Hell, she’s shot more people than you’ve shook hands with.)

To the game’s credit, the main antagonist actually makes a comment about this. But it’s a jump from the usual Croft oeuvre of puzzling and acrobatics with some shooting to a more violent, confrontational game, albeit one that features some cryptic crypts.