A First Look at Dance Central 3 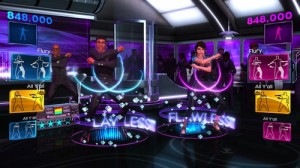 Nick Chester, publicist at Harmonix, is a better dancer than me. At least he’s a better player of Dance Central 3 (DC3), where in one game he bested me by 100,000 points. I’ll never be able to hear Justin Bieber’s “Boyfriend” without feeling even more annoyed than I did before my crushing defeat.

Then I learned how much more there was to DC3 than tween idols, and I perked up considerably. I thought it was going to be a cute little dance game with a decent variety of music—and it was. But there’s far more to DC3 than initially meets the eye or the ear.

It didn’t take long to see that this game has pretty much something for everyone with any kind of inclination to move.

The basics are simple enough: Just dance. You score by best imitating the on-screen dancer. (Hint: Make sure to check out the side of the screen, where you get a preview snapshot of your upcoming moves.) Players can jump in and out of the game at any time. But that was just the first of its many features.

Then there’s the “Keep the beat,” the feature that scores you based on your ability to maintain your rhythm (and takes full advantage of the Kinect’s motion capture to study your every move). Can’t keep a beat? No problem. As with Dance Central 2 (DC2), DC3 will teach you how move.

Chester said, “We have a rehearsal mode that allows you to select which moves you want to learn. You can pick that move out and rehearse. We even have a [virtual] dance coach that will correct you based on what you’re doing. Usher does the voice over for the rehearse mode for this game. He and his choreographer even did the choreography for the two Usher songs that appear in this game, ‘OMG’ and ‘Scream.’”

Songs can be played on easy, medium, hard, or expert, with some of the moves mastered in previous modes making their way up the dance chain.

“We find that a lot of people who play the game for the first time, they’re not feeling the rhythm. But the more people play it, the more comfortable they get.”

When you’re ready—and combative—there’s a “throwdown” feature that pits two crews of up to four players against each other. (You know the scene in Step Up 3D where the Pirates battled the Samurai? Yeah, it’s nothing like that.)

Had Harmonix created these cool dance modes, it still would have been a terrific game. But Harmonix takes the game to the next level by giving us a—wait for it—story mode. That’s right. DC3 has a plot…and it’s about time travel.

It turns out that Dance Central Intelligence, an agency who wants to recruit you, has sent members to the past to stop the evil Dr. Tan from learning historical dance moves. But the agents have been stuck in time, and it’s up to you to help. Okay, it’s not much of a plot. Still, Harmonix officially gets credit for being the first to blend a dance game with an RPG. (I suppose they were, wait for it, thinking on their feet.)