A First Look at the Upcoming MMO ‘Marvel Heroes’ 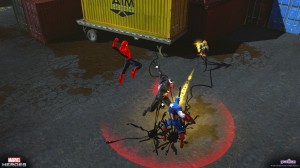 David Brevik, president and COO of Gazillion Entertainment, known best for the creation of Diablo and Diablo II, has been a Marvel fan his entire life. So when he had the opportunity to create the MMO, Marvel Heroes, he leapt on it faster than a speeding mixed metaphor.

His enthusiasm for all things Marvel is contagious. When I learned that I could play one of the many available X-Men (Colossus! Storm! Wolverine!)–for free–it made my fangirl heart go pitter-pat.

Brevik said that Gazillion Entertainment has licensed every single Marvel character, so if your favorite hasn’t appeared on the Heroes list now (Nightcrawler, where are you?), he/she/it may very well appear in the future. I suspect big plans afoot: The hero roster is currently forty-nine pages and can hold five characters per page, which potentially gives you a whopping 245 Marvel-ous characters to play with.

This is a different tack than the one used by the other major comic book publishers’ superhero MMO, DC Universe Online. In DCUO, you had to create your own superhero while watching Batman or Wonder Woman from a distance (although you could take on the guise of DC’s characters in the PvP areas), while in Marvel Heroes, you can only play a Marvel character. I’m not saying that one or the other is better, just different.

It’s awesome that I could play, say, the Hulk. But what about all the other Marvel-ites who also want to play Bruce Banner’s surly alter ego? Won’t we get confused in an MMO setting?

Not necessarily said, Brevik. “You can change the look that your character has by costume.” For example, the suit the Hulk wore as Mr. Fixit is different from what he wore during World War Hulk. “With all [the comic book characters’] history, there are so many ways they’ve been drawn, really, there’s an overwhelming amount of choices.”

Gameplay will be different for other players who also want to Hulk out. “When you level up, because it’s an RPG, you can customize your character. The skills and powers you choose may be different than choices other people will make. Your character will play differently than the way others would play their character,” said Brevik.

What was appealing about this game was how simple it was to just start playing. From the get-go, I was impressed with the clean interface of the game. Currently, on the demo build, you have access to only six skills on your action bar and a mere six slots for equipment.

But here’s where it gets awesome: You can switch out your character at any time. This means you can fly through a room as Storm, switch to the Hulk and smash an enemy, then flame on as the Human Torch. Whereas every other MMO requires you to log out as one character in order to log back in, this one lets you shift almost effortlessly.

You can also become marksman Rocket Raccoon or Squirrel Girl and, um, talk to squirrels. Seriously, that’s her power.

I started off with Ms. Marvel, because she’s a well-rounded character and because her name is Carol. She starts off with Glide (limited flight), Photonic Blast (basic ranged attack), and Punch. Ms. Marvel comes with a decent amount of health, which was nice to have.

The demo starts with a quest ripped from the comics pages, where Nick Fury tells me to stop a prison riot of evil mutants. Die-hard Marvel fans will love this, but the story is engaging enough to lure in non-comic readers. So off I went. In typical ARPG fashion, I found bad guys to fight and fought them with my powers, and for my troubles I received experience and loot. I’m gonna say it: It feels a lot like Diablo II.

It also feels a lot like Marvel. In the starting area alone, I ran into Venom and Green Goblin, and Brevik says that many of the locations found in the comic books also appear in the game. After saving the day, I started in Hell’s Kitchen, the first public area of the game. (Note: All enemy locations are randomized, so writing a walk-through is going to be a bitch.)

Time to quest. Unlike many MMOs where you need to find a quest-giver, quests come to you. . Whether it is a citizen in distress needed aid or enemies of Daredevil needing a beat-down, many quests will appear as you explore the neighborhood. And then came an Event surrounding the supervillain, Electro.

Gazillion has worked it so that you need multiple players to handle an Event, and they intend for players to work together to make it happen. To encourage us, everyone who participates in a successful Event gets loot. (Brevik says you can play the storyline solo, if you prefer.) Next, on to the subway, where I defeated Shocker.

The combat style follows Marvel’s ground-rules. Green Goblin tosses gas bombs; Electro controls electricity; Shocker uses vibration powers. Lucky for me, Ms. Marvel can avoid damage with her power of flight, but I imagine some heroes are more vulnerable to certain villains than others.

You can set your powers in your skill bar and increase the rank of your skills when you level up. Although it seems as if you can unlock more skills as you level higher, Brevik told me he was working with having a skill tree similar to Diablo II. (Skill synergy bonuses were something he wanted to include as well.)

The game is currently in development, so it’s hard to tell which aspects will remain and which will change. But as of now, we had no sense that there are varying difficulty levels, which adds greater challenges but yields greater rewards. Also, having only six slots for gear could be a turnoff to some hardcore players.

But as a Marvel fan, I have every intention of playing because Jean freakin’ Grey. And even though I sadly didn’t see in the demo, the trailer here boasts full-motion comics and a story by multi-award-winning writer, Brian Michael Bendis.

A comic book that you can play like a video game. What’s not to love?

You can sign up for the Marvel Heroes closed beta here. The release date is TBD.