A Hands-On Demo of BioShock: Infinite 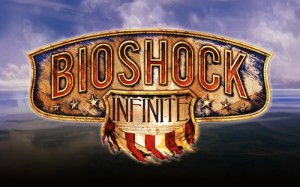 Recently, I was fortunate enough to have spent a few hours playing BioShock: Infinite (B:I), the upcoming Irrational Games FPS. I only played for three hours out of what is likely dozens, and I barely scratched the surface of Columbia, the city in the sky. After only three hours. I predict B:I will land on every “top five games of 2013” list, including mine.

Gamer confession: I never liked BioShocks 1 or 2. I thought they were dark and unsettling and way too creepy. I can appreciate the political themes and the logic behind the world. I just don’t like it.

B:I is different. Columbia, set in the clouds, is infused with light and charm and populated with friendly people who don’t want to kill me. Not at first, anyway.

In B:I, you will play Booker DeWitt, a former Pinkerton agent with a tragic past. We learn early on he has a debt to pay, but if he rescues an imprisoned young woman, Elizabeth, from the sky city, his debt will be cleared.

You can see the start of the game yourself here, where we’re rowed to an island off the coast of Maine by a mysterious English couple and soon wind up up.

Columbia is a gorgeous world. Buildings of the finest neoclassical style hover in mid-air, floating individually yet held together by skylines and an unseen gravity. But it’s a BioShock game, after all, and things turn strange, then ugly, quickly. Cargo cult strange, actually. Here, George Washington, Thomas Jefferson, and Benjamin Franklin aren’t revered: They’re worshipped.

Wending my way through the town, I overhear snatches of conversation and see delightful sights (such as a mechanical horse that resembled a merry-go-round ride, which sadly cannot be ridden, as well as a Disney-like parade). I listen to “voxophone” and watch “kinetoscope” recordings, which provide some useful facts and histories. I also pick up silver dollars, food, and cigarettes that happen to be lying around.

In a store, I overheard a radio playing “Ain’t She Sweet.” Thinking back to my college days, I recall radio wasn’t really broadcast until 1920, and the song was very much a 1920s standard. But B:I is set in 1912. It gets weirder: Soon, I overhear a barbershop quartet singing “God Only Knows,” a Beach Boys song from the 1960s.

Another strange encounter: the same couple that rowed me to the island also appear in Columbia. More than once. I can’t begin to speculate about their purpose in the game. I only know that, despite their protestations to the contrary, they’re following me…and giving me strange choices. (You’ll see.)

Whatever’s going on here, it’s going to be more than a simple snatch-and-grab. On to Monument Island, where Elizabeth is being held.

As I get a lay of the land in the air, and the territory is familiar: A cult of personality. A Big Daddy analog. “Vigors” that give players special abilities, which come in handy during the many, many fights that Booker finds himself in. For example, one of them, Bucking Bronco, can launch enemies in the air or create a proximity-based trap. Another lets me summon a murder of murderous crows. But my first vigor is Possession, which allows players to possess machines. Later, players get the ability to possess humans…and in a nasty turn, they NPCs commit suicide when the effect expires.

But I need Salts to use Vigors, harkening back to the previous Bioshock games, where you need Eve to use plasmids. I found them scattered around Columbia, sometimes in bottles, and sometimes in cigarettes. Careful: Cigarettes may increase Salts, but they decrease your health. You can purchase upgrades to your health and your Salts, as well as purchase ammunition, at familiar-looking vending machines throughout the city. I also found a vest that increases my chance of finding extra ammo on corpses.

As for the fights, the Vigors are useful, but your skyhook, which you receive early on, gets the job done. And by the job, I mean you can messily kill an enemy by tearing into his face. (Get used to the gore. When I least expected it, I opened a door and saw a man being torn apart by ravens.)

But the skylines are best used for the purpose for which it was designed: transportation between Columbia’s many islands. Soaring from skyline to skyline was an exhilarating experience, and when I play the game for realsies, I plan to spend a chunk of gametime flying through the air with the greatest of ease.

After battling many foes, including one who was freakishly dressed as the Statue of Liberty, I eventually skyhooked my way to Monument Island and met Elizabeth. But not before learning how carefully she had been watched her entire life. Our girl is not like other girls: It seems she can tear open the fabric of the universe.

Elizabeth is surprisingly well-adjusted for an extremely powerful girl who’s been locked in a room for the last several years. She was helpful too, offering guidance when I needed it.

Then during our escape, she and I plunge off a broken skyhook into a manmade beach. As Booker put it casually, Elizabeth “raised me from a watery grave.” I wasn’t clear on what happened, but either she saved my life by pulling me out of the water, or she had somehow raised me from the dead. This would make Elizabeth even more important than a girl who can merely rip her way into another universe.

Who is Elizabeth, and what can she do? Why, during our escape, did someone approach her and call her Annabelle? Who is this mysterious English couple, and why do they keep following us? Why do we have the letters AD scarred into our hand? Who the hell is Father Comstock, anyway? And where is my rampaging George Washington?

Despite these many questions, the world of Columbia seems completely coherent and follows its own strange logic. The developers take a fascinating warts-and-all approach by adding the casual racism of the era. At one point, I was given a ball and asked to pelt one or other of a mixed-race couple. Then there was the offhand comment, “I’m half a Jew when I smell silver.” I even meet the Columbia version of the KKK. It’s unpleasant, but Irrational handles it very very matter-of-factly. And hey, it’s historically accurate.

This game is impressive in so many ways, but what’s most impressive is the eeriness I felt in this sun-filled world. There are many deliberate echoes of Rapture in Columbia—too many to be a coincidence.