A Hands-On Look At ‘Beyond: Two Souls’ 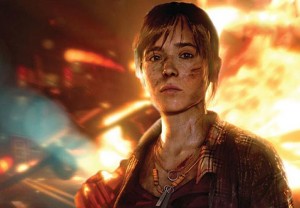 Quantic Dream’s upcoming PS3 game, Beyond: Two Souls, looks to build on the success of its previous title, suspense thriller Heavy Rain, with a touching story of a girl and her vengeful ghost ally. Beyond: Two Souls is stylistically inspired by its predecessor, but it ups the ante by blending event-triggered gameplay with more traditional action elements–as well as the ability to play either girl or ghost.

If you’ve seen the half-hour screening of Beyond: Two Souls, you’d know that protagonist Jodie Holmes can defend herself and her friends, even without the help of Aiden, the entity that shadows her. From an earlier gameplay footage demo, I know Jodie learned her fighting skills in the Army. But in my demo of at E3, I learned there was more to her past than boot camp…and there’s much more to the gameplay than triangle, circle, cross, and square.

In the scene that I played, Jodie (Ellen Page, who lends her voice and motion-captured talents to the role) who is in Somalia, courtesy of the CIA. Her mission: Take out a man named Jamaal.

According to Daimion Pinnock, senior producer for Sony Computer Entertainment America, “This scene was chosen because we wanted to highlight the new UI and show a variety of gameplay. Because the game takes place at various stages of her life, we wanted to show a scene where she’s a lot more combative and she’s able to fight.”

Quantic Dream’s previous game, Heavy Rain, had several fight scenes (the one with Madison was particularly harrowing), but for the most part, your character fought off one opponent at a time. Here, in Somalia, Jodie has to take out multiple snipers. Lucky for us, we have the help of a young boy, Salim. And then there’s the ever-present Aiden.

When we play Beyond: Two Souls, we’re not just playing Jodie but Aiden as well and can flip back and forth between them with a touch of a triangle button. Although Jodie has her gun, the real power—and the real fun—comes with playing Aiden.

Remember how in Heavy Rain our controller was as much a part of our gameplay as the standard buttons? It’s true here as well.

It took almost no time to learn these joystick tricks, and the flow was as natural as doing combos. (Shout-out to my fave games with combo manuevers, God of War: Ascension and The Force Unleashed.)

Pinnock said, “There was a lot of QTE-ing in Heavy Rain. We wanted to show that while there’s elements of that to a degree, we wanted to highlight there’s a different UI that makes the gameplay [in Beyond: Two Souls] a little different.”

Note that Aiden’s range is limited. Stray too far away from your gal pal, and you’re stuck in place.

Although I had fun learning my way around Somalia and its many future corpses, the scene doesn’t develop Jodie’s character very much. But, Pinnock says, “In the coming months we’ll…reveal a little more to the players.

“I like the fact that it takes place over a number of years of her life. It’s unique to be able to see…some of the issues that she faces. I like the storytelling and being able to see and connect to what she goes through. It’s a very meaningful story.”

A meaningful story and ghostly fists of fury? Sign me up.