A Hands-On Look At ‘Rain’ For The PS3 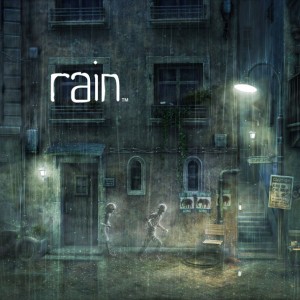 I could tell I was going to enjoy Rain just by the loading screen. It was painted with—wait for it—watercolors. With gentle humor like that, I could see that Rain is the antidote to games with too much sound and fury. Although I saw some great games at E3, none were as quiet as Rain, the upcoming game by SCE Japan Studio. It’s an adventure, but one whose soundscape is filled with the patter of raindrops, not the thunder of bullets.

You’re playing a boy (named “the boy”) who sees an invisible girl, illuminated by drops of rain, running from a creature, something like a papery, skeletal Apatosaurus. The boy follows, only to discover that he too is invisible unless painted by rain. During the course of the game, he has to avoid the creatures while trying to find the girl.

Rain is meditative game, much like Flower and The Unfinished Swan, but here, there’s action in the form of these creatures, who will attack when they see you…so the trick is not to be seen. The boy becomes completely invisible under awnings and buildings, anywhere where the rain does not fall. You navigate him into nothingness when necessary.

How to attack a creature when you’re just a little boy? You lead the creatures under scaffolding, strewn all over the pan-European city’s landscape; as they charge forward, the scaffolding drops on their heads, stunning them. The creatures melt away.

And how to do it when you have nothing but the ability to jump, run, and touch? That’s the trick of it. The game’s many environmental puzzles not only knock out the creatures but also open up areas for the boy to wander into. At times, the boy is invisible, and you only know where he is by his damp footprints. Because he’s invisible, you may have problems guiding him across ladders and bottles and the detritus of the city. But as I smashed my way across bottles, enjoying the sound of them clinking, I realized that was part of the fun of this game. There were points where I could take my time and just play in the rainy streets, enjoying the classical soundtrack.

But soon, the creatures would appear—and like the boy, they seemingly disappear when they’re not in the rain (slippery when not wet?), so I had to listen for their footsteps. When I needed to lure them in a particular direction, I can distract them by splashing puddles, creating a sound loud enough to draw their curiosity. While its back was turned, I ran.

After playing games at E3 where I was running to avoid bullets, it was lovely to play a game where I could run into raindrops. Technically, it’s an adventure game, but more fancifully, I can describe Rain as an elegiac tone poem, a game of indie sensibility with AAA polish.

I’m looking forward to playing in the Rain when it releases to the PS3 this fall.