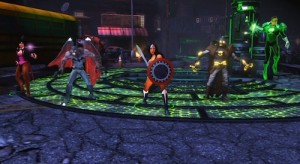 I’ve come a long way from the girl gamer who only likes adventure and RPG games to a girl gamer who finds herself sitting in front of a multiplayer online battle arena game, genuinely enjoying pounding the snot out of Green Lantern. (Take that, Guy Gardner, you macho jerk.) In the upcoming multiplayer online battle arena (MOBA) from Turbine Inc., Infinite Crisis, there’s an awful lot of pounding, blasting, and shooting to be had—and you can use characters from the DC Universe to do it.

Of course, you’re not going to get much in the way of character in your characters, unless you’re talking about stats (attack, health, and power). Here, the plot is not quite limited to, “Fight!” No, with catastrophic events that will alter the map, the plot is, “Fight–and watch out for that asteroid!”

I wasn’t able to gauge much more about the storyline of Infinite Crisis during my recent hands-on demo. But I figured out what I liked about this MOBA…and what I didn’t like.

Because I’m a fan of comic books, I love that players will eventually be able to play every character in the DC stable, even the alternate universe characters. Better yet, each character comes with his/her/its own distinct looks and power sets. Batman from the Prime universe wasn’t playable at the time, but I could have grabbed creepy-looking “Nightmare” Batman, who can turn invisible and stealth attack, or “Gaslight” Batman, who uses sonic pistols to stun his opponents.

Because of my relative inexperience, I chose Doomsday, a tank character who can absorb damage (plus, he was a favorite enemy of mine from Smallville). Doomy’s abilities include “pummeling assault,” where he can slap the ground and all enemies take percussive damage, and “charge,” where he can quickly bash his way forward, kind of like an alien quarterback. And when he gets hit, his fury builds, which fuels his “Kryptonian rage” ability. This amps up his already formidable stats.

I needed all the help I could get. What with enemies getting all up in my grill, not to mention drones that kept getting between me and my capture point, I moved slower than I would have liked—and died more than I had wanted. But at least respawning gave me a serious mission: It turns out that when Doomsday is killed, he can target his killer for his “Revenge” ability, which gives him a special advantage…. But I don’t know what it is. Stupid Green Lantern kept evading my fists.

For a boost, I purchased an Olympus Gambit, an item that grants more health to my character. So how did I earn the funds I needed to buy the item? The nifty thing about this game is that all characters earn the same xp as the round progresses, and every player starts each round fresh. This keeps the game well balanced. Another way Turbine plans to balance gameplay, according to lead designer Ryan Bednar, is to simply ask players about their experience and separate the hardcore from the noobs.

I may be a noob, but I did manage to hurt more than one opponent by picking up cars and flinging them at their heads. Environmental damage, as it happens, is part of the fun. In fact, at the end of the game, characters were ranked by how much money Gotham needs to pay to repair what we’ve destroyed. And when our scores were tallied at the end of the round, this destruction is taken into consideration, as well as our kills, deaths, assists, capture points, and the number of drones destroyed.

Yes, I ranked last. Yes, I had fun doing it.

Infinite Crisis is a free to play game…mostly. Bednar told me there will be a rotating list of twelve free-to-play characters. As for the others…that’ll cost you. No word on how much as yet.

As for what I didn’t like, Infinite Crisis looked somewhat blocky and low resolution (particularly when you compare it to a demonstration video, below). But since the version I played wasn’t considered ready for prime time, hopefully one of the improvements will be to the graphics.

Another element I’m lukewarm about: According to the website, there’s an evolving story somewhere, however, I didn’t see any evidence of a plot.

But my biggest concern is that if everyone can pay to play whatever characters they want, there will be nothing but screens full of Batmen, protecting the universe against the likes of other Batmen.

Yes, there are at least three versions of Bruce Wayne’s alter ego, and there will be skins to help differentiate them. But unless they whip out the 1967 Batman’s gray, yellow, and blue costume, I’m afraid any Batman skins will be as black as the caped crusader’s typical look. And an ability to differentiate characters from each other was the very real problem I had with multiplayer mode in God of War: Ascension.

Will Infinite Crisis challenge League of Legends as the go-to MOBA in the gaming world? Will this game be the one to lure players away from their comic books and/or DC Universe Online? Will I get to play Supergirl? It’s too soon to say. But all I know is that Wonder Woman, Gaslight Batman, and (yes!) Shazam will be out there, waiting to save infinity from a crisis some time in Fall 2013.

(No word on whether DC will include–or acknowledge–the anthropomorphic animal characters of Earth C.)