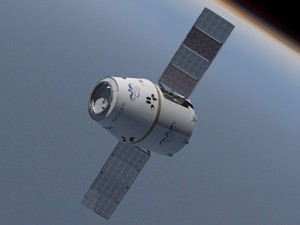 On February 7, 2012, SpaceX, the private space transportation company, will be launching its reusable spacecraft, Dragon, to the International Space Station (ISS). Because you and I won’t be riding the Dragon just yet, I have the next best thing to being there: a panoramic view of its interior, here.

This is one nifty piece of Flash. It has what you expect from a panoramic view—such as the ability to move left and right—and more. But this isn’t just a static image. No, container doors open and close in multiple arrangements, to show us just how configurable the interior is.

Best of all, if you look carefully, you’ll see one hatch opens up to a view of Earth as seen from space.

There’s a reason I’m not lining up for the maiden flight of Dragon, and not just because I sadly lack the $30 million space tourists typically shell out for a trip to the ISS. Not even Forbes readers can’t make this flight, because this first trip is unmanned. For its first prime-time flight, Dragon will be delivering non-essential cargo only.

However, Dragon was designed to carry up to seven passengers to space, and potential space tourists are eagerly waiting for the day when those NOT on the Forbes 400 list can afford it themselves.