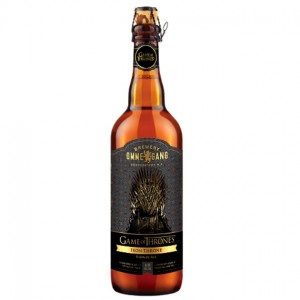 As we learned today, Ommegang Brewery will be creating a line of Game of Thrones-inspired beers. It makes perfect sense. If you read the books or watch the show, many, many people are in their cups (and Tyrion is in twice as many).

In fact, this isn’t the first tie-in product that has been inspired by the George R.R. Martin series, A Song of Ice and Fire. Martin gave one company the license to make swords, for those who want to join Arya with her needlework.

But when you read the books and see the HBO television show, you’ll see there are other tie-in products that work as well as beer…if not better.

The Prince by Niccolo Machiavelli

Amazon.com calls The Prince by Niccolo Machiavelli a book on “diplomacy, war-craft, and human nature,” which pretty much describes the Song of Ice and Fire series, if The Prince had more agonizing deaths and dismemberment. It’s practically begging for a tie-in edition.

In fact, there’s already a “special student edition” of The Prince. So why not the Game of Thrones edition?

Check it out: “Philopoemen, Prince of Aecheaens…is commended because in times of peace he never had anything in his mind but the rules of war.” Now substitute Philopoemen with “Robert Baratheon.” Bingo. Perfect.

The Prince has been in print for over five hundred years.

There have been caskets adorned with videogame controllers, or Star Trek logos, or other toys that the deceased had loved. Some caskets go one step further: They are the cool toy.

Take KISS, the 1970s/still going-strong rock band. They’ve officially licensed a Kiss Kasket for those fans who want to rock on in the afterlife.

Considering how many people have died in the first two seasons of Game of Thrones (and trust me, season 3 will be just as death-y), a coffin stands out as being the most obvious of tie-in merchandise.

If these had been used, the Seven Kingdoms would be safely in the keeping of House Baratheon and not contested by anyone with eyes.

And if you really don’t want to conceive, just put a picture of King Joffrey on the package. Instant mood killer.