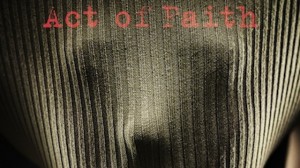 According to The Creators Project, Moore will be collaborating with director Mitch Jenkins in these “occult, noir-flecked film pieces.”

Originally intended as a brief ten-minute, one-off piece, the project has evolved into a multi-layered, multi-episode narrative created by Moore and brought to life by Jenkins.

“Occult,” “noir-flecked,” and “multilayered?” It seems as if my Alan Moore dreams are coming true.

Importantly, Moore has written these scripts specifically for the screen. This is imperative to Moore, who once explained his contempt for adaptations of his work: “[I]t’s simply because they weren’t ever designed to be films. This is what I’ve been trying to explain to these stupid bastards for the past 20 years. They were designed to exploit all the things that comic books can do and that no other medium can.”

Currently, the first film, “Act of Faith,” has been shot; the second film, “Jimmy’s End,” will be lensed soon in Northampton, England. These shorts will be released in October at The Creators Project, an art and technology festival in DUMBO, Brooklyn, in October 2012. For those who cannot attend, The Creators Project plans to release the shorts on their website.