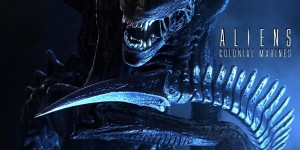 When Aliens: Colonial Marines launched on Tuesday, the majority of reviewers hated it the way Ripley hates xenomorphs…and the gamers who paid to play A:CM hated it even more. Maybe I’m saying this because I didn’t experience as many issues as other people had–also, I had fun playing, because killing aliens = good times–but I’d like you to give A:CM a second chance…with an important caveat.

But first, an overview for those who have been too busy on planet Earth to pay attention to what’s wrong on LV-426. For many (apparently most) reviewers, the game had three very serious issues:

1) The AI. A:CM’s AI has bugs and glitches. Nick Cowen, who played the game on both PC and Xbox, noted in the Guardian that the console had more serious AI issues. But as we can see in the Gearbox Knowledge Base, even the PC had a number of flaws. In addition, some reviewers found the AI was simplistic as the aliens seemed to just run at you, rather than attack you from the side or above.

2) The textures. I mentioned in my review that the textures were strangely coarse, while others noted that they seemingly belonged to the previous decade. Pre-release footage showed better definition; apparently the game had been downgraded and improvements were left out of the final release. (Problems with the console ports is the prevailing theory.)

3) The dialog and plot. Some reviewers took issue with the marine banter as well as the plot, the former being too macho and the latter for being too simplistic. The storyline, reviewers (myself included) noted, also lacks a conclusion.

Yup, those are problems. I evidently had a better game experience than most: 1) I didn’t encounter a single AI glitch on my PC. Not one. And yes, the aliens took to the walls and ceilings often enough to keep me challenged. 2) The textures were certainly unlovely. But played at 1080p, and combined with excellent sound A:CM was absolutely immersive. For a tie-in game, that’s arguably the main objective. 3) As for the story, yes, it was muddled, but it scratched my fangirl itch.

The caveat I have about returning to A:CM, though, is where Gearbox goes from here.

Gearboxes’ first attempt to land the dropship of awesome might have crashed and burned, but it’s not game over, man, yet—there’s one more dropship on the Sulaco, and one more chance they have to get this right.

Gearbox has already patched such issues as, egads, “Spitter’s ‘Acid Spray’ now originates from the mouth.” Yes, it wasn’t forward-thinking of Gearbox to release a game that wasn’t quite ready to ship,  but the fact that the company is actively patching the game, rather than walking away completely, is at least encouraging. (Internet rumor has it that a larger patch is on the way, one that may give players the textures, effects, and improvements they’re looking for.)

Actually, the Texas-based company would do well by their fans if they came out with a complete overhaul—something they may be able to do now that their flagship project, Borderlands 2, has shipped. Patching up a game after release is always an ugly thing to have to do, but it’s even more ugly for paying customers to put up with a game they consider substandard.

(Note to Gearbox: Have xenomorphs respawn behind you, so you can never be 100% certain that you’ve cleared an area. It worked in the 1999 videogame, Aliens vs. Predator.)

If you’re an Aliens fan on the fence or who’s already written off A:CM, my advice is to watch and wait a bit, to see if Gearbox can resolve the criticisms that have been leveled at the game. If you’ve already bought the game, but haven’t played it yet, it might be worth delaying gratification—especially if you have a console. If you’re already tooled up with three co-op buddies, though, go for it; as with Borderlands, A:CM benefits from a shared experience.

Even with the game out only a few days, the modding community has swung into action, so if you’re impatient, there are already some graphics tweaks PC gamers can apply. Those, too, will likely mature. (Alas, that’s no consolation for consoles.)

There’s a good game in A:CM. Despite the problems many had with graphics, AI, and elements of the story arc, I enjoyed playing the campaign, and I’m looking forward to the continuation of the plot in the DLC (so long as it answers some questions, anyway). However A:CM wound up the way it did, I hope more gamers get a chance to experience the best xenomorph spree kill that they can possibly have.