Assassin’s Creed 4: Pirates of the Assassination 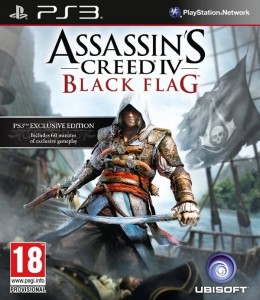 If you enjoyed the Assassin’s Creed videogames, there’s good news: Ubisoft has announced the next installment in the AC saga, Assassin’s Creed 4: Black Flag. But if you liked Connor, a.k.a. Ratonhnhake:ton, the half native American assassin, I guess there’s some bad news too. Connor doesn’t get to fly the black flag.

Taking on the role of protagonist is his grandfather, assassin Edward Kenway. (His son and Connor’s father, Haytham, later took up the Templar cause.) Kenway, an Englishman, died in 1735. We don’t know exactly what year this game had taken place, but the 1720s were a time of relative peace for the United Kingdom.

However, as Ubisoft and anyone who uses Wikipedia can tell you, the 1720s was the height of “the golden age of piracy.” And Kenway was a privateer, a person given permission from his government to attack a foreign ship, kind of like a legitimate pirate. That, and the fact that the game is subtitled “Black Flag”—a false flag that ships sailed until they attacked and revealed their true allegiance—makes me think this game is mostly the playable version of Pirates of the Caribbean but without the wacky antics of Jack Sparrow.

If so, that would appeal to those who want to get their sail on, but it would be sad for others (myself included) who enjoy rooftop hopping and dagger-related escapades. After all, there are only so many people you can kill on a ship before someone gets suspicious. Also, how many escape routes are there when you’re surrounded on all sides by ocean?

I wish I knew what kind of gameplay we can expect in Assassin’s Creed 4, besides sea battles, and knew more about the plot. Then there’s the question of the release date.

One thing we know for certain: We’ll be getting our first trailer this Monday.