Bad News, Everyone: Futurama Is Cancelled 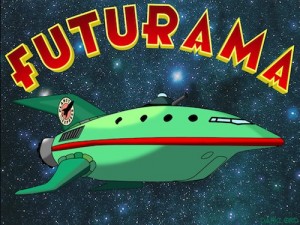 Do you wait in breathless anticipation every time Professor Farnsworth greets his crew with the words, “Good news, everyone?” Can you read one of Futurama’s languages? Do you think that Morbo needs to replace Matt Lauer? If so, then you’re going to need a big swig of Olde Fortran Malt Liquor: the sublime science fiction comedy Futurama has been cancelled.

Or shall I say, cancelled again. This isn’t the first time that the Planet Express ship has been called in for maintenance. More like the third.

The series aired from 1999 to 2003 before Fox sent Fry & Co. into oblivion. After thriving in reruns on Adult Swim, Futurama was relaunched in 2007 with four-direct-to-DVD movies that Comedy Central ran in half-hour increments as a 16-episode fifth season in 2008-09. Comedy Central subsequently ordered a sixth season of 26 episodes, which aired in 2010-11, and a seventh season of 26 episodes, the first half of which debuted in 2012.

Also according to EW, we fans won’t be left like hanging: Comedy Central will be airing the final thirteen episodes of the show, from June 19 to September 4.

But it’s not all DOOOOM, as Morbo would say. There’s a lot to look forward to besides our bitter tears. Producer David X. Cohen said that the show’s last episodes will include guests such as Sarah Silverman (who played Fry’s unfrozen ex-girlfriend, Michelle), Adam West (the actor formerly known as Batman), Burt Ward (the actor formerly known as Robin), Dan Castellaneta (Homer Simpson on The Simpsons, Robot Devil in Futurama), and George Takei (who plays George Takei).

SPOILER: And it will all wrap up with the moment we’ve been waiting for since its inception in 1999…Fry and Leela’s wedding. Hooray!, as Dr. Zoidberg would say. End spoiler.

In its seven seasons on the air, Futurama has won multiple awards and has even inspired a mathematical theorem. However, its ratings have declined from 2.6 million viewers in 2010 to 1.7 million in 2012. All told, Futurama will have aired 140 episodes.