Be a Kinect Superhero at the DUMBO Arts Festival 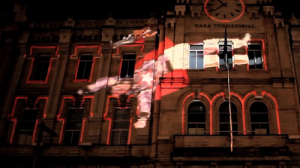 The DUMBO Arts Festival (DAF), formerly the Art Under the Bridge Festival, is having yet another art extravaganza from September 28 to September 30. There, 500 artists will take to the galleries and the streets in order to show their work to nearly a quarter-million visitors. But this year’s DAF should surpass every other for an important reason: One particular installation will allow participants to become a superhero.

In order to go from man to Superman (or woman to Wonder Woman), you first have to stand on a platform. Meanwhile…the Kinect 3D-maps your body. It does not, as far as we know, store this information for nefarious, super-villanous purposes.

According to Lisa Kim, the festival director of DAF, “[The technology] learns to translate your gestures into superhero powers. So if you flick your right hand twice, it means you’re throwing a light dart, and if you raise both hands up, it means you’re growing.”

All of this will be projected into the side of a building, thus turning your big dream into a bigger reality.

The other name for this, besides “cool fun tech” is interactive “projection mapping,” the art and science of projecting images on top of edifices to create something new and different. (For an awesome example of this, see the Prague Clock Tower presentation, here.)

This is not the first time the Superhero presentation has charmed the public. Wildbytes, the creators of this project, debuted Superhero in Spain in 2011. (See video, below.)

The Superhero installation is on a first-come-first-served basis, so you’d better get there early. Because this display is laser-based, it can only be shown at night. Hours are from 8pm to 10 pm on Friday and 8pm to 11pm on Saturday.

Sadly, the superhero effect is only temporary.

Don’t feel like being a flying, bolt-shooting light projection (and if not, what’s wrong with you)? There are plenty of other exhibits to enjoy, including a follow-up to last year’s highlight: a 30,000-square-foot projection mapping installation, which covered the anchorage and the archway of the Manhattan Bridge.

Kim adds, “We have low tech projects too, even horticulturally based projects, like eating salad out of a riot helmet. I promise that’s going to be a thing.”