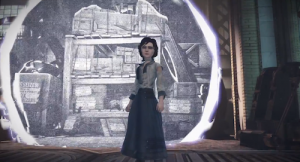 For those of us who are counting the days until BioShock: Infinite’s (B:I) release on March 26, we have twelve days to wait. Irrational Games has been keeping up the anticipation with trailer after trailer…including the most recent one, below, “False Shepherd.”

I played through three hours of B:I over a month ago, and there is footage here that comes as a surprise, such as a chain gang breaking rocks, more Big Daddies, um, I mean Handymen, and an African-American woman (Daisy Fitzroy) who tells us there’s “already a fight.” We also get a more in-depth look at Elizabeth’s special powers. Let’s just say there’s more to her abilities than tearing open the fabric of space and time.

In fact, Elizabeth’s “tears” may be so powerful that it could possibly overbalance the game in the favor of DeWitt’s rescuee. When I played, I didn’t get the feeling that I was overpowered; in fact, I felt just powered enough. But as B:I—and any other game, for that matter—progresses, we acquire new abilities. But acquiring Elizabeth seems like the best power-up you can have.

I can think of at least six enemies that we’re going to have to fight: the policemen who patrol the area, the Founders, the Vox Populi (who may or may not be good guys, but I’m pretty sure we’re going to have to tussle with a few of them), the Handymen, Songbird, and the architect of Columbia himself, Zachary Comstock.

I think we can use all of Elizabeth’s help that we can get.