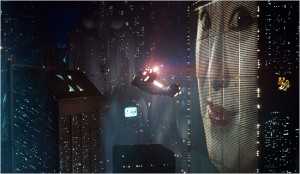 For its many fans, Blade Runner is sacrosanct among science fiction films. When news of a sequel first surfaced, many of us screamed internally, “Do not mess with our holy text!” When Scott’s name was attached, our nerd rage was soothed. But if the latest rumor is true, our former nerd rage energy will be converted to nerd glee: Scott may be teaming up with the original screenwriter of Blade Runner, Hampton Fancher.

According to The Hollywood Reporter,

Original Blade Runner writer Hampton Fancher is in talks to pen an idea for an untitled sequel to the classic sci-fi film for director Ridley Scott and studio Alcon Entertainment.

Blade Runner was based on the Philip K. Dick novel, Do Androids Dream of Electric Sheep (although the title was drawn from a treatment by William S. Burroughs, based on a book by science fiction author Alan E. Nourse). In it, Rick Deckard, an ex-policeman, is called back into service to “retire” androids who just want to live a little (or as android Roy Batty put it poignantly yet angrily, “I want more life!”). The film won multiple awards…one as recent as 2008, with the release of the Ultimate Collector’s Edition. Also, it’s frequently recognized on lists of “greatest movies of all time.”

However, I could see why Fancher may be reluctant to delve into the world of Blade Runner again. Fancher wrote the initial screenplay, but later revisions of the script were handed to David Peoples. The film also suffered through heavy editing, e.g., the US theatrical version added a much-loathed voiceover. After its release, the film went through seven different iterations over twenty+ years, ending with Scott’s original vision in “The Final Cut” in 2007. (I had the pleasure of seeing  “The Final Cut” in a packed-to-capacity Ziegfeld Theatre in New York City.)

Fancher’s involvement in a sequel would be great news. Among other achievements, he was the one who convinced author Philip K. Dick to option the novel in the first place. But if it is untrue, I’ll be going from “nerd rage” to “nerd skull-crushing disappointment.”

Ironically enough, being a fan of replicants is an emotional experience.