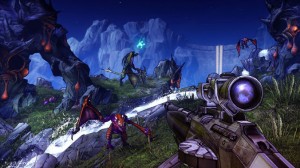 There's too many of them!

It’s not a secret to the people who know me: I love videogames, but I suck at shooters. I tend to die so frequently that I see the reload screen as often as I see the game itself.  So when I hear that Borderlands 2 will be taking players like me into consideration and adding options that will extend my character’s lifespan from “mayfly” to “freakishly long-lived mayfly,” I’m more than optimistic. I’m practically gleeful.

The skill that the Mechromancer character can acquire will increase the chance of a player’s shots to reflect and hit their enemies. This particular skill is more accommodating to those of us who choke when being attacked by skags and spiderants from all directions. Or to those who rarely play.

Better yet, it allows gamers of different twitch reaction times to play together: My husband, who has been studying reviews of the upcoming ARMA 3—a game that promises intense action and extreme difficulty—is a much better player than I am. My friend DF is also a terrific player. When we played Borderlands, I could tell that they were coming down to my level in a way that bored them. The Mechromancer’s skills looks like a great way for me to join in on that multi-gun fun.

Sadly, according to Eurogamer.net, “Borderlands 2 lead designer John Hemingway referred to it numerous times as ‘girlfriend mode,’” a name that is such a box of bad that I hardly want to open it.

Because I’m so genuinely bad at shooters, I’ll let Mary Hamilton of The Guardian do the talking for me:

That’s where this casual misstep draws its power, and why it matters. When women react angrily to the description of an easy way of playing a game as “girlfriend mode”, part of that anger is also aimed at all the countless dudes online who’ll tell you in the choicest language, if you play while openly female, that you shouldn’t be there, that you don’t belong. Hearing that sentiment echoed, however casually, by the lead designer on a game that looks to be doing some good things with female characters is disappointing and irritating; it looks like a studio ignoring the fact that you exist, and that their words will have an impact on their community. For the lack of a better phrase, instead of having a discussion about the genuinely excellent idea of a mode that lets inexperienced FPS players game with more experienced friends, the conversation is about how women can’t or don’t play games.

[UPDATED: To be fair, I very much doubt that Hemingway was being intentionally derogatory. It’s only in a wider context, and particularly in the wake of several unfortunate events where derogatory intent was definitely at play, that it comes across this way. I suspect Hemingway just used a poor choice of words at an unfortunate moment. I also fully intend to play as the Mechromancer as soon as it becomes available.]

I asked Randy Pitchford, CEO of Gearbox Software, to comment, but he has not responded to my request for an interview. But he posted to his Twitter account, “Borderlands 2 does NOT have a girlfriend mode. Anyone that says otherwise is misinformed or trying to stir up something that isn’t there.” And “The future DLC Mechromancer class has a skill tree that makes it easier for less skilled coop partners (any gender!) to play and be useful.”

Officially, Borderlands 2 will call this part of the “Best Friends Forever” skill tree. (Stephen Totilo in Kotaku suggested that this style of play be considered “co-star mode.”)

I love the ability for my bullets to strike a target despite my poor aiming skills. It’s a terrific idea, and I’m behind it 100%.

As Josh Augustine wrote in the October 2012 issue of PC Gamer magazine, where two editors faced off on the topic of “Are modern games difficult enough?” “Dying a whole lot doesn’t automatically make a game fun.” Take it from me: He’s absolutely right (unless the loading screens are as clever as Quantum Conundrum).

Now I’m patiently awaiting the shooter that will extend my lifespan from “mayfly” to “Galapagos tortoise.”