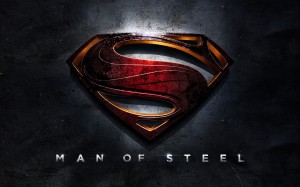 Clark Kent is an affable Smallville resident who’s hiding the fact that he’s Superman, the most powerful person on the planet. Bruce Wayne is a great yet gloomy Gotham detective who fights crime under the name Batman. Guess which one of them stars in the first Man of Steel trailer?

Although fans of Shuster & Siegel’s DC creation will tell you that Clark Kent is Superman, in the newly released Man of Steel trailer, this character far more gloomy than affable…which makes him far more Bruce than Clark. As we comic book and movie fans know, Batman has always been a dark character. Here Clark out-broods him when he asks his adoptive father Jonathan Kent, “Can’t I just keep pretending I’m your son?”

Next we see Clark working on an oil rig, essentially hiding from life—just as Bruce hid from life (albeit in style, in his mansion) at the beginning of The Dark Knight Rises.

Yes, Man of Steel is supposed to be a darker take on the superhero we know and love, and yes, it will likely be an excellent film.

But my fear that the film’s Christopher Nolan-produced roots are showing is only amplified when I notice that Superman smiles for perhaps two seconds in the entire three-minute trailer, below. And not at all in the previous trailer.

Man of Steel is a reboot of the superhero legend with a budget of $175 million–less than the $200 million it cost to make the previous Superman movie, Superman Returns (2006). Superman Returns earned $400 million…not enough for Warner Bros. to greenlight a sequel.