‘Cabin in the Woods’: The Mad Libs Review 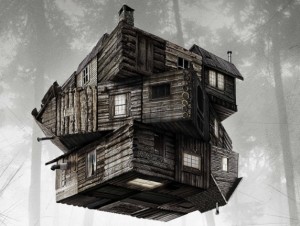 Cabin in the Woods

Imagine every episode of Scooby Doo you ever watched as a kid, and mix it with the works of Joss Whedon (creator, Buffy the Vampire Slayer, Angel, Firefly) and Drew Goddard (writer Cloverfield, Angel “Lineage,” Buffy “Conversations with Dead People.”) The result? Cabin in the Woods. And since I really – no Joss, wait, I didn’t tell them anything, really I didn’t. Please, put down that hammer!

Ya see, a few weeks ago, Whedon asked his fans to not spoil Cabin the Woods, which was produced by Whedon and directed by Goddard. And because I love him so very much, I don’t want to Joss to hate me. Also, the threats.

So I’ve written a spoiler-free review. And because it’s spoiler free, I can tell you that on the surface it seems like a standard college-kids-get-picked-off-in-the-woods kind of movie. There’s more to it than that, though. Much more.

But not that much more. I saw this as a fan of Whedon and Goddard, and their multilayer stories have impressed me for years. However, Cabin seems a little too linear, and its horror more visceral than emotional; typically Whedon and Goddard have frequently brought the pain in a poignant, practically soul-searing way. And in terms of gore, we get worse on The Walking Dead.

Other than these criticisms, I like a good horror film, and Cabin was a good—albeit not great—entry in the genre. I recommend it on the strength of the dialog alone. Plus there’s Whedon and Goddard’s sly and delightful humor.

So how can I describe a movie that is essentially indescribable?

I’ll have to do it with Mad Libs.

Five college students (played by Chris Hemsworth, Anna Hutchison, Fran Kranz, Jesse Williams, and Kristen Connolly, who incidentally looks like PERSONAL NOUN) road trip to a cabin in the back woods to chillax at a cousin’s cabin. The cabin seems a little ADJECTIVE, considering the out-of-place ADJECTIVE NOUN, but our heroes ignore it. Instead, they VERB. PERSONAL NOUN is VERB into the cellar. The others VERB. Unknowingly, they VERB NOUN. PERSONAL NOUN and PERSONAL NOUN are ADVERB VERB, and PERSONAL NOUN VERB.

Meanwhile, at a secret NOUN, PROFESSION (played by Amy Acker, Brad Whitford, and Richard Jenkins) VERB. PROFESSION VERB, while PROFESSION is genuinely VERB about the NOUN, but is VERB PREPOSITION alcohol: “Tequila!”