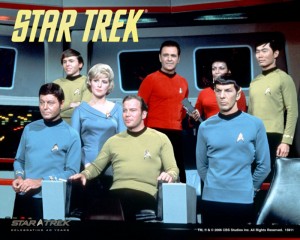 It was a geek’s dream come true: a lost Star Trek script by writer Norman Spinrad, who had written “The Doomsday Machine,” had recently resurfaced. And if that news weren’t exciting enough, it was going to be produced by a group of experienced fan filmmakers…and directed by Spinrad himself. But like so many of our Star Trek-based dreams, like the ones with our own teleporters, it looks as if this won’t become reality.

The New York Times bears the bad tidings: CBS, which owns the rights to the script, “He Walked Among Us,” is blocking the not-for-profit, fan-made production.

Spinrad’s story is about a man who established himself as the ruler of a planet, in defiance of the Federation’s Prime Directive, which specifies non-interference in developing cultures. Written as a dramatic piece for comedian Milton Berle, the script had gone into massive rewrites. Spinrad wrote on his blog that he personally asked Star Trek creator Gene Roddenberry to “kill” the story.” Spinrad, who was paid $5,000 in 1967 for his work, lost track of the script, but found it again after a fan gave him a copy in October 2011.

Now CBS has emailed a cease-and-desist to the fan film company, Phase II, which has produced some extremely high-quality fan films with many of Star Trek’s original actors and writers. And so the episode ”He Walked Among Us” is deader than a Denevan flying pancake after exposure to UV light.

And that wasn’t the only cease-and-desist that CBS had issued: Spinrad received one as well; Spinrad had offered “He Walked Among Us” for sale on Amazon.com, but recently pulled it in regard to CBS‘s wishes.

Did the sale of the script online threaten the fan film? Did Spinrad wake the wrath of CBS‘s intellectual property attorneys?

I spoke with attorney Harold Feld, who I had interviewed previously. He said that the sale of script may not have had any impact on the fan film. As for Spinrad, Feld said,

“It’s easy to see why Norman Spinrad in good faith said, ‘I wrote this this. This is my work and I have the copyright to it,’ and he’s not wrong that he has certain rights to it. But the fact that he has rights isn’t enough, because CBS also has rights.

“I have no doubt that he acted in good faith and genuinely believes that he has copyright in the material, and again, he probably does. But the way copyright law works, good faith is not enough.”

Unsurprisingly, CBS is now “considering opportunities to offer licensed copies of the work.”