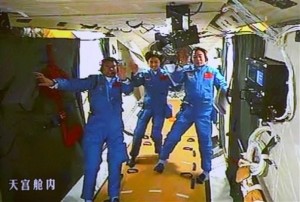 China, a country with over 4500 years of recorded history, gave the world, gunpowder, paper, compasses, movable type, and even the seismological detector. Now China has one more bullet point to its list of achievements: it’s the third country to have docked two spacecraft in orbit.

According to China Manned Space Engineering, the Shenzhou 9 spacecraft took two hours to drift toward Tiangong-1 lab module, but the craft docked with the module “in less than eight minutes.” Previously, the Tiangong-1 had one other spacecraft successfully dock, but the Shenzhou 8 was an unmanned spacecraft.

This successful docking of the Tiangong-1 was merely the first step toward habitation: the Shenzhou 9 crew have boarded the module and will be living on board for thirteen days. And their presence is merely yet another step in China’s plans for space. According to Wikipedia, the Tiangong-1 will be deorbited in 2013 and replaced by the Tiangong-2 and -3. The Tiangong-3 will then form the backbone of the future Chinese space station, to be built by 2020.

China’s space program is moving at full speed ahead and upward, especially when you consider the “space race” ended in 1975. Its first manned mission, Shenzhou 5, took place on October 15, 2003, and turned military pilot Yang Liwei into China’s “Space Hero.” The second manned mission, Shenzhou 7, sent three men Zhai Zhigang, Liu Boming, and Jing Haipeng to space on September 25, 2008; Zhigang performed the first space walk by a Chinese astronaut. The Tiangong-1 itself was launched on September 29, 2011–only seven years from its first manned mission to its first module.

Later this week, the astronauts will undock and redock the Shenzhou 9 from the space module, to verify their their systems are still functional.

We wish the astronauts, known to the Chinese as taikonauts–a portmanteau of the words “taikong,” the Chinese word for space, and “naut,” the Greek word for sailor–the best of luck in their mission.