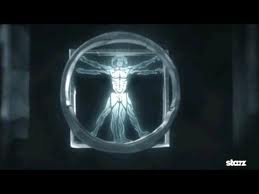 Leonardo Da Vinci was the eponymous Renaissance man. He was a painter, an inventor, a scientist, a mathematician, a writer, and one of the patron saints of geekdom. But nothing is known about his life from the ages of 24 to 26. Da Vinci’s Demons, the upcoming TV show from Starz, is speculating about these gaps of knowledge with some logical guesswork, with a touch of magic thrown into the mix.

This one-minute trailer is light on the fantasy, but we get a hint of it in the form of Alexander Siddig (known to many of us for his role as Dr. Bashir in Star Trek: Deep Space Nine), whose character offers to teach Leonardo about what seems like the mystery of life and death.

We also get a glimpse of some lovely Italian interiors, some awesome costumes, and a touch of debauchery. (After all, this is the channel that brings us Spartacus, whose final season will begin in January 2013.)

Da Vinci’s Demons will be coming to Starz in Spring 2013. The show was developed by David S. Goyer, who co-wrote The Dark Knight Rises Trilogy and Man of Steel.