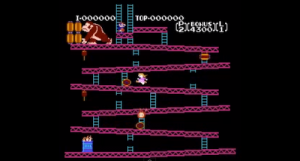 Mario* is the hero of Donkey Kong, a 1981 arcade game about an Italian plumber who must rescue his sweetheart Pauline from the ill-tempered, poorly named giant gorilla, Donkey Kong. But every time he reaches his distressed damsel, Donkey Kong whisks her away. But what if you didn’t want Mario to rescue Pauline? What if you wanted Pauline to rescue Mario instead? Now, with the help of gamer and dad Mike Mika, you can.

Mika created a patch that swaps out Pauline for Mario, so the woman extricates her plumber pal rather than the other way around. And he did it for his daughter.

The three-year-old girl, who had played Mario’s other friend, Princess Peach, in Super Mario Bros. 2, “naturally just assumed she could do the same in Donkey Kong,” Mika wrote on his YouTube page “I told her we couldn’t in that particular Mario game, she seemed really bummed out by that. So what else am I supposed to do? Now I’m up at midnight hacking the ROM, replacing Mario with Pauline. I’m using the 2010 NES Donkey Kong ROM. I’ve redrawn Mario’s frames and I swapped the palettes in the ROM.”

What an awesome father he is. And not only has he created a game for his daughter to play, but also he’s created a patch for all of us to enjoy, which you can find on his YouTube page. Mika says, “Note: You need the original ROM and XDELTA to apply it.”

Now Pauline can save Mario from the lovestruck simian, and they can live happily ever after, except…

…Except that Mario and Pauline never do manage wedded bliss, engaged bliss, or even live-in bliss.

Alas, in Mushroom World, Mario is now in a relationship with Princess Peach, and Pauline and he have broken up. However, according to MarioWiki, they have maintained a friendship that includes Mario helping Pauline whenever she needs it–and a good friendship with an ex-boyfriend is a wonderful thing.

As for their relationship in the real world, they have no happy ending…and no ending either. For those of us who never had enough skill (or enough quarters to hone it), we saw it in the documentary, The King of Kong: Donkey Kong does not have a real finale. It only has a kill screen.

*Mario wasn’t actually named until later. The character was originally a carpenter.