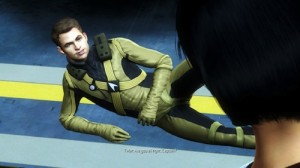 I’m going to be writing a review of Star Trek the videogame for the PS3. But while waiting for my copy to arrive, I was graciously given a Steam code so I could get a head start on joining the fabulous co-op fray. That was the theory, anyway. In practice, I’m playing solo.

Although the game was released two days ago, Star Trek‘s co-op mode isn’t working…at least, not on the PC. Despite repeated attempts, a friend and I have been receiving the error message, “Could not join. The game session is no longer available.” A quick internet search has revealed that I’m not the only one with this problem.

According to the Twitter feed @Star_Trek_Game, “We are aware that some users run into problems starting a co-op game on PC & others are having no issues at all. We are looking into this!” Later, the feed posted, “We hope to have more answers in the morning as we look into this, and will definitely let you know!” Sadly, the writer of that tweet meant the morning of the 24th.

But currently, it is the evening of the 24th, and co-op mode is still unavailable. I’ve visited a few boards, including the one on Steam. So far, no one has claimed they can play co-op mode—but of course, the ones who can play co-op mode are probably playing right now, so that’s not much to go on.

Xbox and PS3 users, are you having this problem? Is anyone playing co-op mode? Are you enjoying it?