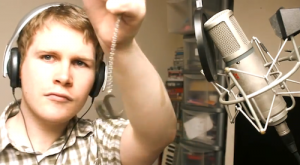 Did you think that Cortana telling the Master Chief to wake from his four-year slumber was music to your ears? Did you think Skyrim was an epic adventure worthy of story and song? Dan Bull does. He sets his love for videogames to music—hip hop music, actually—and makes every song a gamer’s delight. If you love videogames, you should listen to Bull’s work. Preferably while playing Borderlands 2.

You don’t have to take my word for it. You can hear one of his thirty-odd songs about gaming yourself, here. (Or just go straight to my personal favorite, “Skyrim Epic Rap.”) Bull isn’t the only artist who raps about videogames—a small subgenre of hip hop called nerdcore fills that niche—but he is one of the most successful.

His music is solid, but it’s his lyrics that are especially clever. He peppers his songs with references upon references, and listening to his songs and recognizing the source material feels like scoring an achievement. For example, his tribute to Dishonored: “Tonight I’m bringing Dunwall to life / as I walk on water / through Walls of Light / you heard the king / as the urchins sing / revenge solves everything.” As Dishonored players know, “Walls of Light” refers to an electrified gate that will kill enemies who pass through it, and the game’s tagline was, “Revenge solves everything.”

I recently chatted with Bull, who lives in England, and spoke to him about his music.

What made you decide to rap about videogames?

The simple answer is that I am a total geek. I’m a huge fan of Bethesda Softworks’ Elder Scrolls series and its sister series Fallout. Another favorite is Civilization, which I’ve been playing in its various incarnations for fifteen years now. And I’m only 26.

I have also loved rap music for a long time. These two aspects of my personality seemed rather incongruous until I stopped caring; I went from writing fake macho battle rhymes to songs about things I’m genuinely passionate about, digital rights, current affairs, Anglicana–a word I just invented then–and of course, gaming.

As art forms, hip hop and video games are both very direct. There isn’t usually much subtext or personal interpretation involved in either genre. Gradually I started to realize, gaming and rap are not that different. They both involve a way for people to vent aggression in a pacifist kind of way, Instead of shooting someone, you can rap it about being violent or vent it in a game. I’m actually surprised that there’s not more of it out there.

I’m a hip hop convert though, and I’d say that a rap song about any topic on earth can be great as long as there is real passion and truth behind it.

How did you turn your passion into a career?

I spent ages in hospice a few years ago, because I had a ruptured appendix. All I could do is play games, and that period made me think about how much an effect games had had in my life: It’s a way of escaping in another world. And I made a song called “Generation Gaming,” which I wrote when I was ill. It was a one-off to begin with, because I thought I had covered everything I wanted to say about games in this song. I didn’t do anything else about games until I was contacted by Machinima, the YouTube channel, and they wanted me to do a regular feature.

I had an agreement with Machinima where you could submit individual videos to them and take a share in [the profits of] the video. So I did that a few times, but they had uploaded the last video I did with them, Fallout 3, and it was corrupted. They eventually noticed it and replaced it, but they didn’t reimburse me in any way for the lost views, so just thought I thought maybe I should do it myself. So I started to put everything on my own channel.

Eventually I applied for the YouTube partner program, so I can get a share of the advertising. That was last year, October, just over a year ago. They accepted me into the partner program, which was good timing, because just after that I published the Skyrim rap video, which completely dwarfed the popularity of anything else I had done before that.

Tell me about your writing process: Do you come up with the music first?

It various from song to song, but usually the music comes first. I keep a folder on my desktop of compositions by myself and other producers with whom I work. When I come up with an idea for a song, I browse through the folder to find something that suits the mood, and then I start scribbling furiously whilst listening to the music on repeat.

I really enjoy doing the research side of [writing]. It’s extremely geeky, trawling through wiki files and finding out lists of names of levels and stuff. I try to work in as much wordplay as possible, so if I can replace a word with another word which happens to be the name of the multiplayer level of something, that one percent of the people watching will notice–an easter egg–I like that. The more geeky and in-depth I can get in the lyric writing process, the better.

Do you play the games before you create the music?

In some cases I do, and in other cases all I’ve seen is a teaser trailer. I enjoy the challenge of scouring the net for everything I can find on an unreleased game – the storyline, the lore – and trying to weave them together into something that might capture the experience. A good example of this is my Dishonored song, which was based on a pre-release trailer and a few interviews with the game developers.

You end every video with the phrase, “Dan Bull Douglby.” What the hell is a Douglby?

My initials are DGLB, and my parents used to phoneticize it as a nickname to “Douglby.” When I created my YouTube account back in 2006 I didn’t intend to publish my own material on it, so I used “Douglby” as a pseudonym. Now, despite my best efforts, there is utterly no way to change it to something relevant. I’m sure it’s lost me a fair few potential subscribers, as I often receive emails saying, “Hey Doug, can you link me to Dan’s channel?” It’s mind-boggling why YouTube haven’t enabled this simple feature.