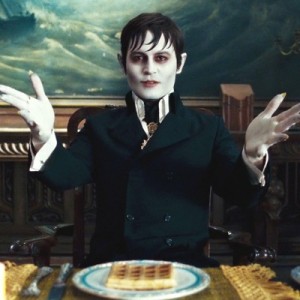 As the credits rolled at the end of Dark Shadows, my father turned to me and said, “I don’t get it. Was it supposed to be a comedy or a horror?” I didn’t understand what he meant: obviously it was a comedy. There were some watered down PG-13 horror, but there was nothing about it I considered horrific. But when you consider the movie is about the vampires, witches, and yes, even werewolves, it would have been nice to have had my flesh crawl just once. It doesn’t mean that I didn’t like Dark Shadows—after all, it starred Johnny Depp, who is so talented that he deserves every acting award ever invented and a few that haven’t—but it left me wanting more.

Dark Shadows is a movie based on the 1966-1971 soap opera, a cult sensation known as much for its star Jonathan Frid’s portrayal as the vampire Barnabas Collins as for its low-budget, one-take cinematography. This new version, directed by Tim Burton, kept the basic plot but eschewed the television show’s straight-faced drama in favor of laughs.

Barnabas is a young man from a wealthy family, the builders of a town called Collinsport. Although he has no problems bedding the family’s maid, Angelique, his heart belongs to the lovely Josette. He spurns the maid’s love, a bad move. It turns out that the woman who scrubs his floor and polishes his, well, whatever needs rubbing, is also a powerful witch. She sends Josette to her death and curses Barnabas with vampirism. For the icing on that creepy cake, Angelique has Barnabus locked in a coffin and forgets about him.

Barnabas is freed two centuries later, in 1972, and he makes his way to the family home of Collinwood, where the surviving Collins’ live in reduced circumstances. The family includes head of the house, Elizabeth (played by Michelle Pfeiffer), her surly daughter, Carolyn (Chloe Moretz), Elizabeth’s unscrupulous brother Roger (Johnny Lee Miller), and his possibly insane son, David. Rounding out the characters, we have the family housekeeper, Willie (Jackie Earle Haley), as well as Dr. Julia Hoffman (Helena Bonham Carter), who cares for young David.

Meanwhile, a woman who eerily resembles Josette, Victoria Winters (Bella Heathcote), has arrived to become a nanny David, a troubled boy who insists that he sees the ghost of his late mother. Barnabas is instantly smitten with the girl who insists, “Call me Vicki,” and in his ardor delivers my favorite line: “A name like Victoria is so beautiful, I could not bear to part with a single syllable of it.”

As Barnabas schemes to turn the Collins family from old money to nouveau riche, Angelique appears, demanding that he requite her unrequited love.

The best parts of Dark Shadows really are amusing. It was entertaining as hell to see Barnabas navigate his way through the 20th century. (His rendition of The Steve Miller Band’s “The Joker” is a new classic.)

The character of Barnabas was a delight to watch. Depp walks the same way as when Jonathan Frid played him—with an elegant lurch, as if waking with a cane were a part of his gait. And although he’ll never be as sexy to me as Frid, he grabbed my sympathies and held it…even though, when you think about it, he’s shaded very grayly: Barnabas starts off screwing the maid before working his way toward serial killing. Still, I cheered for him.

There were also some stellar supporting roles. Bella Heathcoat gave us a leading lady who was charming and sweet yet practical. Chloe Moretz’s character earned her sneer. Jackie Erle Haley did a terrific job as a burned-out Renfield. Christopher Lee, the former Hammer Horror player and current master of awesome gets only one scene as a fishing captain, a criminal underuse of the fabulous Lee. And if you’re sharp-eyed, you’ll catch the late Frid’s appearance at a ball.

But not every performance was a winner. Eva Green’s character, Angelique, was a little too one-note for my tastes, with wild eyes and an over-wide grin taking the place of menace. Had she been less over-the-top evil and more quietly threatening, this film could have had hit the perfect balance of humor and horror. Her wildly fluctuating accent didn’t win me over, either. Another problem, this time with the luminous Pfeiffer: her face barely moved. No, she wasn’t botoxed to the bone: the editor seemed to cut away from her before she flexed the muscles of her face. Seriously. What was up with that?

I liked Dark Shadows for its humor, and the plot twists that I should have seen coming but didn’t. I loved how the carefully curated soundtrack worked. But I wish it had had more dramatic tension to balance it out. Barnabas was always sympathetic. I would have preferred this movie had made him poignant.