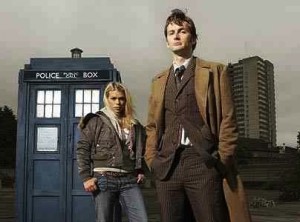 Doctor Who has brought sci-fi adventure to each and every episode of its Timelord-like lifespan, but the BBC has promised an even more spectacular broadcast for the 50-year anniversary. And it’s starting to look as if the BBC is making good on that promise: David Tennant, who played the 10th Doctor, and Billie Piper, who played his companion Rose Tyler, will be returning for a one-episode stand.

This is terrific news, particularly for fans who loved the dynamic, not-quite-romantic duo. Although it would be great to see other Doctors and companions reprise their roles, this announcement alone puts the episode on my if-you-interrupt-me-during-the-airing-I-will-kill-you list.

Tennant spent three seasons in the role, including several specials. His last appearance was in the 2010 episode, “The End of Time,” where he regenerated after succumbing to radiation poisoning. Piper, who left the show after two years, but made guest appearances such as “Journey’s End,” where and the (alternate, half-human) Doctor finally kissed.

This isn’t the first time more than one Doctor has appeared on screen together. We’ve seen cross-Doctor episodes in 1972 (“The Three Doctors”), 1983 (the 20th anniversary special, “The Five Doctors”), and 1985 (“The Two Doctors”). Tennant also appeared with Fifth Doctor, Peter Davison (also known as his real-life father-in-law), in a 2007 special, which you can see here.

Filming begins this week in the UK, although BBC America was maddeningly unspecific about location, so spoiler addicts with high-powered telephoto lenses will need their detective skills to find the production crew. Also unspecified: the character played by the fabulous John Hurt (Alien, Harry Potter, 1984).

Doctor Who returns to BBC/BBC America tonight after a six-month hiatus (not including the 2012 Christmas special).