Did Valve and Nvidia Just One-Up the Wii U? 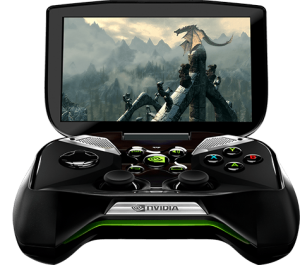 If you’ve been following the news from CES 2013,  you’ll know that NVIDIA has announced its Tegra 4 powered, handheld Android-based gaming device, SHIELD. It looks like the PS3/Xbox-style gamepad controller and a Nintendo DS had a baby. And like all infants, it has terrific potential.

Kotuku reports that Valve’s Gabe Newell has also confirmed “living-room-friendly PC packages sold by both Valve and third-party companies,” known to eager fans as the SteamBox, a Linux-based PC designed to run Steam. We don’t know the specs of the SteamBox yet, but we know it’s intended to sit in your living room and hook up to a HDTV. We know it’s directly related to Big Picture Mode, which turns Steam into a full-screen app and is also designed to work with gamepad controllers like the Xbox 360 controller.

Or perhaps the SHIELD.

I know I’m speculating here, but imagine yourself sitting in front of your SteamBox-powered TV, holding a SHIELD, with its own built-in multitouch screen. It’s shaped differently–but you’ve got a ridiculously similar configuration to Nintendo‘s Wii U platform.

From this CNET First Look video, you can see that the SHIELD can stream your game from a PC running Valve’s Steam client. That sounds nifty, but on its own it seems a little pointless. I mean, if you’re using a Wifi connection, you’re in the same location as your PC anyway. So why not just use your PC’s own screen?

Because the two screens can potentially display different visuals (of course, there needs to be games that support this).

In my overview of 2012, I mentioned Valve might just steal the living room out from under Nintendo, Microsoft and Sony. If they can price it right, and these devices come out sooner rather than later, are Valve and Nvidia about to eat Nintendo‘s mushroom lunch with more powerful hardware on an open platform?