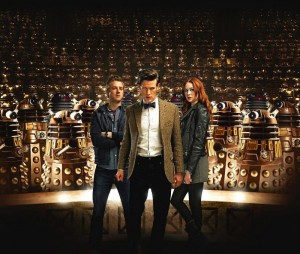 When last we left the Doctor (Matt Smith) at the end of Doctor Who‘s season 6, he had faked his death in a spectacular way. At the start of season 7, that, as well as his marriage to River Song, isn’t important. What’s important is, 1) The Doctor is back in a new adventure, and 2) We’ve just seen one of the more remarkable bait-and-switches in Doctor Who history.

But first, an overview of “Asylum of the Daleks.”

The Doctor is back and up to his old tricks, namely saving people from danger, having fantastic adventures, and wearing questionable neckwear. This time, a summons for help by a stranger, Darla (Anamaria Marinca), goes awry when an eyestalk abruptly bores out her forehead and palm. It’s not just any trap: It’s a Dalek trap. “The Doctor is acquired!” says a disturbingly familiar shriek.

The Doctor’s companion, Amy Pond (Karen Gillan) is also back, as is her companion, Rory Williams (Arthur Darvill). Only Amy and Rory are not very companionable, as the couple is on the verge of what looks like a bitter divorce. (I’ve actually become so fond of the affable Rory that when his emotional temperature dips below freezing, I feel the cold.)

Individually, Amy and Rory are whisked away and brought to the Doctor and their captors. They’re on a spaceship, guided by the Parliament of the Daleks.

Daleks, Daleks everywhere, and their sheer numbers convey a very real sense of menace. But instead of exterminating the Doctor, a stadium of them order, “You will save the Daleks! Save the Daleks!”

The Dalek prime minister tells the Doctor that the shielded planet–where they keep the most battle-scarred and unstable of their kind–has been penetrated. The Doctor realizes that if someone can get into the asylum, the Daleks can get out. Somebody needs to go in and shut off the forcefield so the Daleks can turn the asylum into space dust. That somebody is you-know-Who.

The Daleks patch in a signal coming from the planet below. It’s a young woman, Oswin Oswald, survivor of the crashed spaceship Alaska, who spends her time baking mediocre souffles and making entries in her voice diary. She cheerfully tells the Doctor she’s “keen to move on.”

So rather than fulfill their long-term (the Daleks have been his enemy since 1963) promise of “exterminating” the Doctor, they instead send him on a mission. And since “it is known that the Doctor requires companions,” Amy and Rory go along for the ride. But first, they’re given bracelets to protect them from the nanocloud. Before Darla, the “Dalek puppet” tells them what a nanocloud is, the three of them are fired (literally) at the asylum planet.

There, Amy and the Doctor meet Harvey, another survivor of the Alaska. He leads them to the ship, to meet the rest of the crew, who are strangely unresponsive…cuz they’re all corpses in an advanced state of decay. In a chilling moment, Harvey remembers aloud that he is one, too. “I died outside…. I forgot about dying.” Harvey, who becomes a Dalek puppet like Darla, attacks. In a move that seems almost out of character, the Doctor repels Harvey with a fire extinguisher.

The Doctor explains to Amy that nanoclouds are “microorganisms that automatically process any organic matter, living or dead, into a Dalek puppet. Anything attacks this place it automatically becomes part of the on-sight security.” And just as soon as you can say, “Creep-tastic” the corpses rise up and attack them. They flee, but in the ensuing scuffle, one pulls off Amy’s bracelet.

Meanwhile, Rory, on the other hand, has fallen down a large hole in a room full of old, seemingly inactive Daleks and accidentally wakes the them. “Eggs,” one says. “Eggs.” Rory is mystified at first, but their demand quickly becomes clear: “Eggs…TERMINATE!”