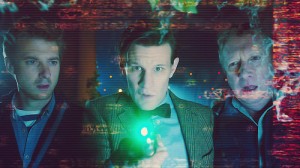 Forget the drama of Doctor Who‘s first episode of season 7. Episode 2 of Doctor Who is pure screwball comedy. Unfortunately, although the episode had its charms, for the most part it was too, well, screwy. It’s as if the plot were lost in the fluffy fun of the episode.

The Doctor has just helped Queen Nefertiti and is trying to escape her amorous gratitude when he receives an important message. He takes “Neffy” with him to the Indian Space Agency (ISA) in the year 2367, where he learns that an unknown spacecraft is streaking its way toward Earth. A quick trip to the African plains in 1902, and he picks up an old pal and big game hunter, John Riddell. The next thing we know, Amy and Rory–as well as Rory’s handy-dandy father, Brian (Mark Williams, a.k.a. Harry Potter‘s Arthur Weasley)–have been swept up in the TARDIS to join the Doctor on his latest adventure: to learn more about the ship.

Got it so far? Reread the previous paragraph if you need to.

The Doctor and his gang (he claims he hasn’t had a gang before, but actually he had acquired one to rescue Amy in “A Good Man Goes to War”) quickly encounter the eponymous dinosaurs. Fortunately for all, triceratops are herbivores.

In quick order, the Doctor, Rory, and Brian get transmatted down to the engine room (which looks suspiciously like an English beach), leaving Amy, Neffy, and Riddell to explore. The Doctor and his pals encounter two robots, another triceratops, and a wounded old codger, Solomon (David Bradley, whose angular looks currently make him Britain’s most popular villain).

Solomon asks the Doctor for help with his injury, and when the Doctor inquires how he came to be in possession of dinosaurs, he orders the robots to shoot Brian. The Doctor heals Solomon while Rory heals his father.

Amy (along with the flirtatious Neffy and Riddell) discovers that the ship had been piloted by Silurians, an intelligent race of anthropomorphic dinosaurs who had evolved on Earth before humans. The Silurians had built this ship, an ark to seed another planet, but they have strangely disappeared while the ark’s animals remain on board.

Solomon, it turns out, is not above murder to turn a profit; he had spaced all the Siluarians in order to keep the priceless dinos for himself. (Note: Given the tragic resolutions to most of the stories involving the Silurians in Doctor Who‘s long history, their mass death doesn’t get the attention it deserves because it’s incompatible with the roller-coaster momentum of the episode.)

After learning that Solomon doesn’t know how to change the ship’s course, the Doctor, Rory, and Brian manage an easy getaway…on the back of a triceratops. The ISA calls in to say they’re launching the missiles as the spaceship is entering Earth’s atmosphere. Oddly, the ISA doesn’t ask about the ship’s occupants at all.

Meanwhile, some raptors must have turned up, because for some reason (and maybe the original BBC version has an explanation for it, because BBC America’s did not), Riddell and Amy suddenly grab some tranq guns. We cut away with an equal lack of explanation.

Solomon shows up and tells the Doctor that, yes, he realizes that missiles are about to destroy the ship. But Solomon won’t destroy the Doctor and his friends…as long as he gets to take the valuable Queen Nefertiti with him. Neffy heroically agrees to go in order to save her newfound friends from Solomon’s robots.

Just as all seems lost, the Doctor comes up with a plan to rescue Neffy: Rory and Brian, who can pilot the Silurian ship only because they belong to the same “gene chain,” steer it away from Earth. Amy and Riddell keep themselves occupied by tranq-ing the raptors. Then the Doctor retrieves a beacon from the Silurian ship, rescues Neffy, and avenges the Silurians by placing the beacon onto Solomon’s ship. Solomon and his robots are destroyed by the Indian missiles.