Doctor Who: 7.03: The Quality of Mercy Is Strained 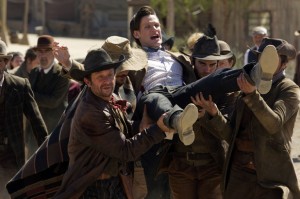 In the Doctor Who episode “A Town Called Mercy,” we have a duel at High Noon, a preacher who recites the Lord’s Prayer, an undertaker who measures the Doctor for a casket, and pretty much every stock character you would expect from a Western on TV. Actually, “A Town Called Mercy” could have collapsed under the weight of its clichés, but it managed to save itself with some thoughts on redemption. (That, and the awesome Ben Browder, the actor who rocked Farscape and two+ seasons of Stargate: SG1.)

The Doctor, with Amy and Rory traveling behind him, arrive at Mercy, a small town Western town whose citizens still remember the Civil War, only five years past (putting the episode at 1870). Mercy is under siege from a cyborg gunslinger, Kahler-Tek, and he wants the town to give over the other Doctor, Kahler-Jex.

The sheriff, Isaac (Ben Browder), wants to protect Jex, who had previously saved Mercy from a cholera epidemic. However, the Doctor soon learns that Jex isn’t a kindly savior but instead a war criminal responsible for creating cyborgs including Tek, whose bodies were fused with armaments and turned to weapons of war.

Isaac is killed, and he passes on the title and responsibility of sheriff to the Doctor. Although the Doctor is ready to hand over Jex to the gunslinger, Amy gives him a talking-to, and he instead defends Jex. Jex, feeling the weight of the souls he has killed, commits suicide.

The Doctor convinces Tek to stay in Mercy as its new sheriff.

Although this episode isn’t as madcap as “Dinosaurs on a Spaceship,” and nowhere near as compelling as “Asylum of the Daleks,” “A Town Called Mercy” has an internal consistency that we’ve rarely seen in recent episodes.

Amy turns the Doctor down when he offers her a new trip, saying, “Our friends are going to start noticing that we’re aging faster than them.” It’s a wonderful point, one that Doctor Who has never touched upon. Also, the fact that Amy is more concerned with life on 21st century Earth means she’s less interested in life on the TARDIS. Amy is disengaging with her former imaginary friend—and they both know it.

The point that interested me the most was the Doctor’s age: 1200. Considering he was 907 when he met Amy and 1103 around the events of Lake Silencio, he’s obviously spent a lot of time as this particular incarnation. And the fact that Amy points out that “you travel alone for too long,” means that he’s spent the better part of three hundred years wandering without a companion.

It seems the loneliness has taken a toll on our hero. The Doctor would have easily sent Jex to his death-by-cyborg, because Jex was responsible for the dismemberment and rememberment of these killing machines. But Amy intervened, telling him that they had to be better than that. Amy insisted on mercy, when the Doctor furiously explained that his mercy had resulted in nothing but death. Amy’s compassion won out.

I loved the fact that the Jex was both the villain whose work had accelerated the end of his war by killing many on the other side—as well as the hero who had saved the town from cholera and given them electricity and heat. Heroes and villains tend to be black and white characters. Jex was a perfect shade of gray.

This was also the second time this season that there was a play on the word “Doctor.” In “Dinosaurs on a Spaceship,” the villain wanted the Doctor because he wanted a doctor. In this episode, the gunslinger was out to kill an alien Doctor, just not ours.