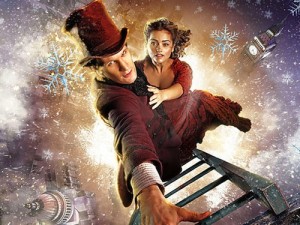 Great episode. Pity about the poster.

“The Snowmen,” also known as the 2012 Christmas special, is the beginning of a new chapter in Doctor Who, with a new enemy to chase down and a new companion to chase with. But actually, the new enemy hails from a story from 1967, “The Abominable Snowman.” And the companion we meet in the episode is not the one we’ll be traveling with on our journey through season seven (or thirty four, depending on how you count).

It starts with a flashback, a winter scene from 1842 where Walter, an unhappy boy avoids other children in favor of making a snowman. “I don’t want to talk to them,” he tells his snowman, “they’re silly.” The snowman creepily echoes, “They’re silly… Don’t talk to them, they’re silly.”

Flash forward fifty years, and the young boy has grown into a man, Dr. Simeon (Richard E. Grant). We know he’s a bad guy not because he serves a talking snow globe (voice of Sir Ian McKellen) with plans to end humanity. It’s also because he serves up some hungry men to a bunch of carnivorous snowmen.

In a different part of London, Clara, a barmaid, notices a snowman that wasn’t there a moment before. She asks a passing stranger about it.

That passing stranger is the Doctor, a world-weary version of himself. He tells her, “Maybe it’s snow that fell before. Maybe it remembers how to make snowmen.” She says, “What, snow that can remember. That’s silly.” The Doctor asks, “What’s wrong with silly?” She replies, “Nothing. Still talking to you, ain’t I?”

The Doctor leaves for his carriage, and he doesn’t notice that Clara gives chase. He speaks to his friend, Madame Vastra, through a makeshift telephone, who is pleased that he’s taking an interest in life again (see for the deaths of his previous companions Amy Pond and Rory). Vastra notes that all of his adventures start with the same two words. What two words?

Clara pokes her head into his carriage like a mad, adorable jack-in-the-box: “Doctor who?”

Dr. Simeon appears at the home of the wealthy Captain Latimer, and he notes that in the previous winter’s freeze, Latimer’s governess had drowned in his pond and was trapped frozen inside for a month. He hands Latimer a card bearing the initials “GI,” (and underneath, “Great Intelligence Institute”), demands to take what is growing inside Latimer’s pond, and haughtily leaves.

He is soon confronted by Madame Vastra, the Doctor’s Silurian friend, and Jenny, the human who happens to be Vastra’s wife—no impropriety there, thank you very much. Vastra points out that the ice crystals in the snow have a low level telepathic field—the Snow remembers and can learn. “This could be a weapon in the wrong hands, don’t you think?”

“I think winter is coming,” Simeon says. A Game of Thrones reference in Doctor Who? How very geektastic.

The Doctor studies the snow with Strax, a Sontaran ally who can’t (or won’t) overcome his warlike nature. When the Doctor asks him, “When you find something brand new in the world, something you’ve never seen before, what’s the next thing you look for?” Strax replies, enthusiastically, “A grenade!”

The Doctor also decides what to do with Clara: give her a touch of the memory worm and erase the last hour of her memory. But Strax winds up getting touched instead. (The Doctor tells Clara, “Don’t try to run away.” She responds, “Why would I? I know what’s going to happen next, and it’s funny.”)

He’s soon curious about her curiosity. And when they’re confronted by the snowmen, he tells Clara to picture them melting. When she does, she convinces him not to erase her memory, because then she wouldn’t know how to defend herself.

The Doctor leaves, apathetic to her concern that they should be warning people, and she follows—all the way to a park, where the Doctor grabs an invisible ladder and climbs it, disappearing in the night. Clara, with effort, leaps up to catch the ladder. She walks up to the clouds and spies the TARDIS, but she leaves before the Doctor can see her.

The next day, Clara the barmaid reveals herself to be Clara, the governess of two children, Francesca and Digby. Fran has been having bad dreams about the drowned woman, and the children show her the pond. Although the snow had thawed in the evening, the pond is still frozen. Clara rushes to the park to find the Doctor.

There, Clara meets Jenny, who takes her back to the Madame Vastra. The Silurian explains to Clara that the Doctor used to help people, used to save worlds, but was hurt by the loss of his friends and now lives alone, withdrawn, and no longer helps. Why would he now take an interest in Clara, Vastra wants to know.

In one of the coolest scenes in Doctor Who history, Vastra administers a test to Clara, in which she can only respond with one-word answers. “Truth is singular, lies are words, words, words.”

At the end of this test, Vastra relays to the Doctor Clara’s answer to the question, why should he help her. The word Clara gives? “Pond.”

With that, the Doctor is rallied into action. He appears at the Great Intelligence Institute to take measure of the situation. He determines that the snow’s next move is to evolve, and the Latimer’s pond is where it will begin.