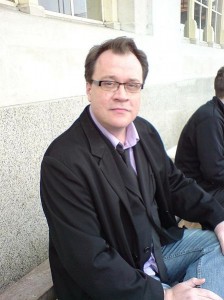 Russell T. Davies, who revived Doctor Who from its 16-year slumber and turned it into the BBC powerhouse that it is today, is producing his newest television creation: Aliens Vs Wizards.

This show, a blend of science fiction and fantasy, is heading for BBC’s children’s programming, CBBC. As with Doctor Who, Davies will be both producing and writing the show.

According to the BBC,

Aliens Vs Wizards tells the story of two 16-year-old boys – a secret wizard and his scientist friend – who challenge the attempts of aliens to destroy the earth.

Davies, who at one point concurrently produced Doctor Who and its two spin-offs, Torchwood and The Sarah Jane Adventures, started his writing career in children’s television (Dark Season, Century Falls) before journeying into more adult fare (Queer as Folk, Bob & Rose, Casanova).

Aliens Vs Wizards will be broadcast this Fall. Twelve half-hour episodes are scheduled.