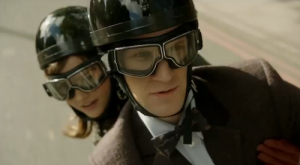 With the exception of the Christmas special, fans have been Doctor Who-less since September 29, when the Angels took Manhattan and Amy and Rory took leave of the TARDIS. But soon we’ll be Who-ful again. BBC America will be giving us the second half of season 7 starting March 30, 2013.

As you can tell from the trailer, below, the second half—with Cybermen (!) and the Victorian trio of Vastra, Jenny Flint, and Strax–looks as exciting and adventure-filled as the first half. Only this part of season 7 has Clara Oswin Oswald (Jenna-Louise Coleman) on board. Now instead of the “girl who waited,” we’re going to get to know “the woman twice dead.” (Doctor Who watchers will know exactly what this refers to.) And the Doctor will be exploring the mystery that is Clara.

So who or what is Clara, anyway? Is Clara a causal nexus? Is she a fixed point in time that has unfixed itself? I’m sure that showrunner Steven Moffat will make the answer as interesting as possible.