‘Doctor Who’ Review: ‘Bells of St. John’ Is a World Wide Web of Intrigue 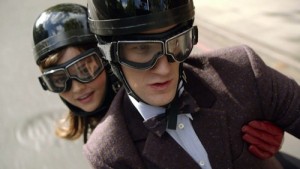 This is only the second time in Doctor Who history that the phone on the police callbox-shaped TARDIS has rung. The first time was in “The Empty Child,” a season 1 (or season 27/28, depending on how you count it) episode, but that was an effect of electricity and nanogenes and whatnot. “The Bells of St. John” marks the first time that the phone box has actually been used to receive a telephone call.

There were other firsts in this episode, the plot of which was best described by the Doctor (Matt Smith) himself: “Human souls trapped like flies in the world wide web.” For example, the Doctor temporarily abandoned his TARDIS in favor of a motorcycle. And then there was the use of the words “Doctor Who.” He asks a young nanny whose aid he comes to, the enigmatic Clara Oswald (Jenna-Louise Coleman), to repeat it. “I never realized how much I enjoyed hearing that said out loud,” he says. It was a wonderfully conspicuous shout-out to the fact that we refer to the character as Doctor Who, but we’re still not sure it’s his name.

There are also some wonderful callbacks to the Doctor who has been sorely missed these many months away. We smile as he reunites with his fez and shrine-worthy bowtie, enjoys a jammie dodger, and makes declarations of what is (or in this case, isn’t) cool.

Although the episode starts with the Doctor Who version of The Ring, we soon see the Doctor has been holing up in a monastery in Cumbria, 1207, meditating on the mystery of Oswald, when his TARDIS phone rings. And wouldn’t ya know it, it’s Clara, this time a 21st century version of herself, calling for tech support about her Wi-fi. (Wonderfully, the Doctor provides it.) Her password? It’s rycbar123, the mnemonic for the words, “Run you clever boy, and don’t forget, because you don’t want to have to reset your router to the factory default.”

The Doctor arrives at her doorstep, hoping for a reintroduction, but Clara (sans Oswin) Oswald doesn’t recognize him. Soon, thanks to a creepy encounter with a robot “spoonhead” child who is controlled by the ruthlessly efficient Miss Kislet (Celia Imrie), her mind is partially uploaded to a datacloud, where Clara could remain trapped in Wi-fi forever. However, the Doctor intervenes, and Clara is returned safe and sound…and imbued with new leet computer skillz.

Our ever-curious Time Lord takes the opportunity to snoop around Clara’s bookshelf while she rests from her ordeal. On it is a book, 101 Places to See, with a leaf pressed into its pages. Adorably, the Doctor has left flowers and jammie dodgers, one of which is half-eaten, at her bedside.

So what about those human souls trapped like flies? It seems Kislet is busy uploading minds for “the client,” and her control room is filled with all the very confused people she’s grabbed so far. To be targeted, hapless victims connect to a mysterious Wi-fi network, which steals their identity figuratively, after which a spoonhead robot turns up to steal it literally. The body left behind is under Kislet’s control, subject to override commands, including adjusting their emotions from her touchpad.

Soon, Kislet’s group, the Shard (seemingly both their name and the building in which they work), use some formidable power to toss an airplane at the Doctor and Clara’s heads, but not before we get a look at Kislet’s managerial skills: She wants to kill an employee, but since he’s about to go on vacation and she doesn’t want to be unreasonable, she decides to wait until he returns. Har har.

Our heroes escape in the TARDIS, and after the inevitable but all-too-brief, “It’s bigger on the inside” moment, they land inside the airplane, where the Doctor manages to avert a crash landing. The next morning (or a few seconds later, it’s hard to tell time in a time machine), back in London, the Doctor wants to track the Shard, as well as untangle the mystery that is Clara. Why did this Clara choose to be a nanny, as the 19th century version did? She evades him like a boss.

Clara insists that her new hacking skills can get him the location he needs and shoos him away to get her coffee. In an incredibly cool scene, the Doctor then encounters Kislet, or rather, the people she is controlling. Kislet uses the bodies of several people to relay a message equivalent to “resistance is futile.”

The Doctor returns—but it’s a bait and switch. It’s a spoonhead Doctor, who sucks Clara’s mind into the datacloud, successfully, this time. The real Doctor finds her body slumped over a table. The Doctor immediately pursues the Shard…with his antigravity motorcycle (as you do). He crashes into Kislet’s office, and he means business. Clara-restoring business. Kislet refuses. The Doctor then reveals he’s actually Spoonhead Doctor and uploads her into the datacloud. From the beyond, Kislet quickly orders her flunkie to download everyone, herself included.

In yet another wonderful callback, UNIT troops appear to help Shard employees who are returning to their former, uncontrolled selves.

But the best callback of all: the being behind the world wide web of intrigue is the Great Intelligence, the main antagonist in the episode, “The Snowmen,” using the body of its accomplice, Dr. Simeon (Richard E. Grant). Since Kislet has failed the Great Intelligence, it tells her, “It’s time for you to reduce.” With that, he restores a previous version of her—a scared little girl who poignantly wants her mummy and daddy.

Later, Clara speaks with the Doctor inside his TARDIS, and he invites her to join him. She coyly tells him to ask her again tomorrow. Still trying to understand Clara, he asks her about the pressed leaf in her travel book. “That wasn’t a leaf,” she said. “That was page one.”

With that, the Doctor is ready to find out who Clara is. And so are we.

– The repartee between the Doctor and Clara is a delight. Their banter is sparkling and clever, and the writers have given her a wit that they never gave Amy. While Martha Jones had intellect and Rose Tyler brought the gosh-wow enthusiasm, Martha was serious and Rose was street smart but not brainy. Clara Oswald, after only three episodes, is a terrific combination of smart and fun. How much do I like her? I’m already putting her in the same league as Sarah Jane Smith.

– The dialog is terrific. Clara, thinking that the Doctor had invited her into the police box-sized TARDIS as an excuse to get close to her, calls his time machine “a snogbox.” Then there’s the Doctor’s throwaway line, “I don’t know the future. I just work there.”

– The Great Intelligence looks like an extremely powerful and malign entity and seems like the perfect foil to our happy-go-lucky Doctor. I sincerely hope Richard E. Grant is the recurring bad guy for this season.