‘Doctor Who’ Stamps Will Help Deliver Letters on Time 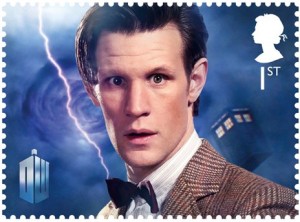 After almost fifty years of watching Doctor Who, we’ve learned that the Doctor can appear at any time and any place, particularly when you’re not expecting him. But we know where he’ll be appearing in March 2013: on a UK envelope.

Because of this, not every image is flattering. For example, Sylvester McCoy’s face is obscured by too many special effects. But the most recent Doctors come across wonderfully. Sadly for those of us outside the United Kingdom, these stamps are only usable within England, Northern Ireland, Scotland, and Wales. We can collect them as keepsakes, though.

To those using these stamps: Your letters will have more impact if you use a TARDIS-colored envelope. But at least paying your bills will become a little less onerous. Besides the not so flattering picture of Sylvester McCoy, I have one other nit to pick: The Ood? Really? Not the Sontarans or the Master?

Which Doctor Who villain would you rather see on a stamp?