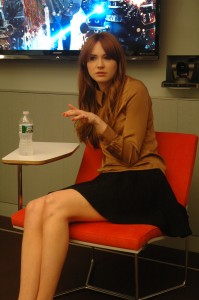 I learned a few things about Karen Gillan, who plays Amy Pond in the BBC TV show, Doctor Who, recently. She wants to act in a comedy. She can’t swim. She has absolutely perfect skin. Oh, and she understands exactly why the Weeping Angels, one of Doctor Who‘s most frightening creations, are so godawful chilling.

“It’s this weird childhood game that [the Angels are] based on, and therefore it really taps into your childhood fears. I think that’s why they’re so good.

“They’re coming back in my final episode,” said Gillan.

The episode Gillan refers to is “The Angels Take Manhattan,” where she and Arthur Darvill, who plays her husband, Rory Williams, will be departing after two and a half years on the show. Actress Jenna-Louise Coleman, will subsequently be joining the Doctor, currently played by Matt Smith, on his non-stop adventures.

“The day I had to shoot my final ever scene…everything that happens in the scene was not even acting. It’s just real.”

Until then, fans have five more episodes of Amy and Rory, plus the web series “Pond Life.” (The first episode can be seen here.)

Besides the Weeping Angels, fans have even more to look forward to, as well as to be frightened of. In the first episode of the upcoming season, “Asylum of the Daleks.” the Doctor, Amy, and Rory encounter the Daleks, the metal-bodied monsters from Skaros and the iconic Doctor Who villain.

Gillan had never found them frightening until filming “Asylum.” “In this episode, and I’m not just saying this, they’re genuinely really scary, really freaky….  We learn more about them than I think we’ve ever learned before and that’s maybe what makes them scary.”

And what about Amy’s feelings about not being able to have raised her child, Melody? Will we get any resolution before Gillian leaves the show?

She said, “What’s really interesting is there’s a pretty huge revelation along those lines that I can’t tell you anything about. But we’re going to learn something mindful to that storyline and it’s going to be dealt with through that. And we’re going to see a whole new side of Amy and Rory, as to their relationship [in “Asylum”].”

Although Gillan will be leaving Doctor Who, she will still be connected to the show. “I love being part of this world that I sort of didn’t know anything about before, and now I feel like I belong to it,” she said. “That’s one thing that makes leaving a little easier, which is I’ll get to watch it and not know what’s going to happen and be surprised.”