Does Felicia Day Matter At All? (Yes) 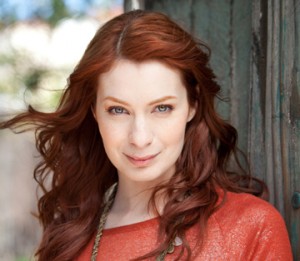 On June 30, games journalist Ryan Perez got drunk and pulled up his one-month old Twitter account. He tweeted, “Does Felicia Day matter at all? I mean does she contribute anything useful to the industry, besides retaining a geek persona?”

If this isn’t a lesson against the dangers of drinking and tweeting, I don’t know what is. Actress Day has been contributing to the gaming world–and a champion of creator-owned content–ever since she wrote, directed, and starred in her extremely successful web series, The Guild, about MMO gamers, in 2007. That revitalized her acting career, which now includes roles as a voice-over actress for videogames and a starring role in Dr. Horrible’s Sing-along Blog, as well as guest roles in geek favorites Dollhouse and Eureka. She has also created her own YouTube Channel, Geek & Sundry, discussing, among other things, videogames.

Although that particular tweet was not overtly sexist, randomly attacking a figure not only well-liked, but well-liked by his own target demographic leaves his credibility as a games journalist in doubt.

However, he didn’t stop there.

Perez, who at the time was writing for Destructoid.com, later admitted on Twitter that he had committed career suicide with his next tweet, directed at Day: “Could you be considered nothing more than a glorified booth babe? You don’t seem to add anything creative to the medium.”

“Booth babe” refers to the women who have been hired at tech conventions to look pretty and lure men into their booths, and booth babes have been banned from conventions such as PAX (Penny Arcade Expo). The phrase is unambiguously derogatory.

Calling Day a booth babe is tantamount to calling her an ignorant, scantily dressed female whose only purpose is to titillate men. Not only is that sexist, but also it’s an insult to Day’s accomplishments: She’s nobody’s marketing gimmick and has built her career success by herself.

Although Day has not written a game, she contributes to the culture of gaming, a culture that is as important as the games themselves: The reason that massively multiplayer online games are successful and wide-reaching isn’t because of exploring worlds or killing enemies, which plenty of single-person games also provide, they’re popular because of human interaction, such as player vs. player combat and guild alliances.

Does Day matter at all? Her Klout score, which is currently 81, says she’s an influencer of popular culture. Perez certainly learned that she mattered when he was let go for calling her a booth babe. He also opened himself up to a flood of criticism from Twitterers and website posters alike, including friends such as actor Wil Wheaton. (Afterward, Perez apologized to Day on Twitter, and Day accepted.)

After the incident with Anita Sarkeesian, a pop culture journalist who came under fire for her Kickstarter project that will delve into perceptions of women in gaming, it’s perhaps not surprising that Perez has also attracted a stream of supporters, some of whom are more disturbing than Perez’ creeping misogyny. These supporters are decrying Destructoid’s decision to let Perez go.